STATESIDE: Biden’s age, inflation and immigration record to be tested 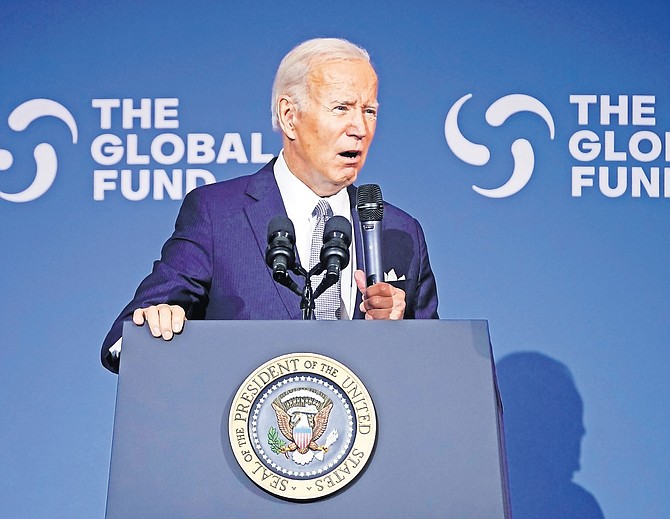 POLITICIANS are quite comfortable lobbing verbal grenades at an incumbent president of the opposing party, and the current crop of Republican office holders and job seekers is no different. In the steady, numbing drumbeat of GOP criticisms of Joe Biden and his administration, the loudest seems to be about his age. He is 79 years old. Even the Democrats must concede that Biden is, actually, old. He’s less than four years older than Donald Trump, but let’s face it: He looks a good deal older than the Trump we are accustomed to see on the campaign trail or even playing at one of his golf courses.

But apart from Biden’s age, what deficiencies of the current administration are GOP candidates campaigning against these days? According to recent polling, the biggest issue by far is inflation, which has continued to grow in recent months despite falling gas prices, rising employment and job creation figures, and the determined if thus far ineffectual efforts of the Federal Reserve Bank to keep inflation in check by raising the American central bank’s prime interest rate. Still, Americans do seem to be feeling better about their and their country’s prospects. Biden’s approval ratings have risen by 30 percent in the past couple of months.

One can argue about the roots of the current inflation, and some Democrats are still blaming it on Trump’s consistent and very un-Republican deficit spending profligacy. But Biden was elected to the presidency nearly two years ago. By this point in his administration, he owns inflation. He is advised by lots of smart people with fancy graduate degrees in economics and finance, but if economics is still an imprecise social science designed essentially to forecast human spending and saving behaviour, Biden’s ability to directly impact inflation is rather severely limited.

After Biden’s age and inflation, what’s next on the Republican list? It’s the current administration’s immigration policy, and this is going to be a potent GOP line of attack, both for the November elections and beyond.

Republican governors Ron DeSantis of Florida and Greg Abbott of Texas have seemingly been trying to outdo each other as both face re-election challenges on November 8 and DeSantis continues to position himself as Trump’s most legitimate political heir for the GOP presidential nomination in 2024. Abbott has become well known for shipping busloads of illegal southern border-crossers to such northern cities and Democratic strongholds as New York City, Washington, DC, and Chicago.

It’s a pretty clever tactic, shifting as it does a tiny portion of the burden of managing illegal immigration from Republican border states to Democrat centres in the North from which it is easy for mayors to pontificate about the evils of harsh border measures in Republican states while paying, until recently, no significant financial or political price for such polemics.

Now that is different. The DC mayor is seeking federal funding to help her beleaguered administration cope with several busloads of immigrants. Her appeal looks hypocritical and trivial by comparison to the challenges governors like Abbott and DeSantis face. Florida’s chief executive, keeping pace with or even exceeding the efforts of Abbott, reportedly used unspent federal COFID assistance funds to charter a couple of flights of recent illegal migrants up to Martha’s Vineyard, a summer resort playground frequented by many liberal notables, including former presidents Barack Obama and Bill Clinton and the Kennedy clan.

There are wealthy Republicans on this offshore Massachusetts island, too, but they are less frequently in the public eye. No GOP president since Eisenhower has spent much publicised time in this fancy place, which is also the scene in 1969 of Senator Ted Kennedy’s infamous bad driving incident in which a female campaign aide died. Kennedy reportedly drove off the road into the water, left the scene of the accident and didn’t even report it until the following morning nine hours later. He got a two-month suspended sentence.

Back to Biden and his immigration policy. During the 2020 campaign, it was pretty clearly enunciated as follows: “Joe Biden understands the plight of immigrants, who come to this country with little more than the clothes on their backs, the hope in their heart, and a desire to claim their own piece of the American Dream. It’s the reason we have constantly been able to renew ourselves, to grow better and stronger as a nation, and to meet new challenges. Immigration is essential to who we are as a nation, our core values, and our aspirations for our future. Under a Biden Administration, we will never turn our backs on who we are or that which makes us uniquely and proudly American. The United States deserves an immigration policy that reflects our highest values as a nation.”

During his first day in office, Biden reversed many of Trump’s policies on immigration, such as halting the construction of his predecessor’s “magnificent border wall” and ending Trump’s ban on travel from over a dozen foreign nations. However, Biden has not rescinded a Trump administration border restriction that became practicable due to COVID- 19 public health concerns. Title 42 (of the US code) prohibits asylum seekers from lawfully petitioning for asylum in the United States, as well as expediting the return of families to Central America, if it can be demonstrated that their journey originated or passed through areas of high COVID incidence. Implementation of Title 42 can cause families to be repatriated within weeks, compared to years for an average immigration case.

Biden’s Centres for Disease Control has repudiated Title 42. But despite scientific advances in preventing and treating COVID-19, border officials have reportedly continued applying Title 42, expelling thousands of asylum-seeking migrants each month over the span of two years. According to some commentators, this accounts for over 75 percent of expulsions under the Biden administration.

This helter-skelter policy has inspired little confidence or praise. During fiscal year 2021, the US Border Patrol reported more than 1.6 million encounters with migrants along the US-Mexico border, more than quadruple the number in the previous fiscal year and the largest annual total on record. While the actions of Abbott and DeSantis are widely criticized as opportunistic stunts that further victimize hapless migrants, they do keep the public spotlight on what may be Biden’s weakest policy point.

Early in his administration, Biden assigned immigration reform to Vice-President Kamala Harris. It may not be fair to blame her for this administration’s failure so far to develop a cogent, coherent immigration policy, but she has had little visible positive impact on this fragmented policy so far.

WHILE the world watched the final journey of Queen Elizabeth II to her final resting place at Windsor Castle just to the west of London, the European Union, and Germany in particular, continue to scramble to try to protect their industry and citizenry from the anticipated devastation of a near or complete Russian natural gas cutoff as winter approaches.

According to news reports, European Commission president Ursula von der Leyen has issued a call for “a mandatory target for reducing electricity use”, a “cap on the revenues” of low-cost energy producers, and a “solidarity contribution” for fossil fuel producers.

This means rationing, price controls and excess profits taxes. Von der Leyen has said that Europeans “have to be proactive. We have to prepare for a potential disruption of Russian gas. And this is a likely scenario. That’s what we’ve seen in the past”.

Russia supplies an estimated 30 percent of natural gas that fuels German electricity production and heating for homes. German Chancellor Olaf Scholz wrote in an op-ed in the German press in July that “when Putin cuts gas supplies, he uses energy as a weapon. Not even the Soviet Union did that during the Cold War”.

Germany remains Europe’s largest economy and arguably its continental economic engine room. It has signed new gas import deals with the US and Qatar. Some coal-fired power plants are back on line and the government in Berlin is reportedly considering every option at its disposal under the assumption that Russian economic blackmail in the form of suspending all gas transmissions is likely.

This morning, a severe energy crisis is looming in Europe. A food crisis is already at hand in Africa and the Middle East. Putin is again ratting his nuclear saber. What is next?