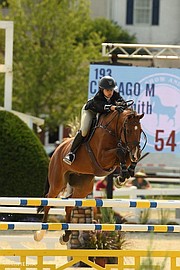 The first step was to give her horse, Chicago M, a well-deserved rest. Then at the beginning of September Kacy Lyn and Chicago returned to the ring at the Swan Lake Quentin Fall Classic Show to ride in the Low Juniors Division.

At 1.20m, the fence heights were considerably lower than the pair’s usual competition level, but it was the refresher they needed.

“[We] did the Low Juniors to sort of get us back into the ring after Young Riders,” noted Smith. The “step back” paid off: with rebuilt confidence, the pair finished 1st and 2nd in their two classes, winning overall Division Champion.

Back in the groove, last weekend Smith and Chicago M returned to the higher, more technical courses at the 2022 Devon Fall Classic in Devon, Pennsylvania. As there were no 1.30m Amateur classes Smith opted to ride in the 1.30m Open, competing in good company against the likes of former USET team member and Pan-Am bronze medallist Laura Chapot, and other notable professionals.

Nonetheless the pair did well, riding a fast, aggressive first round in a time of 67.91. A rail down at fence 9 cost them four faults and a place in the jump-off.

However, the initial time was still fast enough to place the pair as the fastest of the non-clear rounds and finish in 9th place out of the 26 competitors.