FACE TO FACE: Honoured for work in building the civil society of The Bahamas 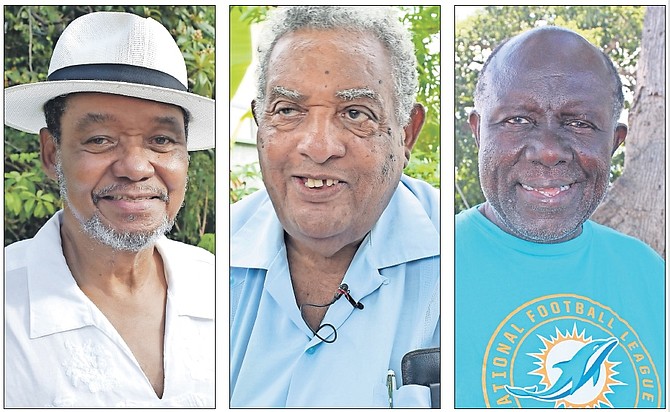 WE often hear the cry of the public concerning affairs of the country. Issues of governance, crime, immigration, opportunity and advancement are hot topics throughout Bahamian society. People often call on the government to make changes that would improve their quality of life in all aspects. While the cries may be valid, they must be balanced with action. That action can come from the very individuals making their concerns known. Bahamians have the power to make a difference - and that power comes through their role in civil society, according to three nation builders set to be honoured for their long standing work in building the civil society of The Bahamas.

Terry Miller, Richard Johnson and Leonard Archer have been agitating for Civil Society Bahamas for decades. They believe that if more organisations and individuals committed to making a difference in society, join hands with an organisation committed to doing just that, the country and its people would elevate.

Civil Society Bahamas (CSB) is an umbrella organisation representing the interests of all the non-profit and non-governmental organisations in the Commonwealth of the Bahamas.

It is a non-partisan, non-governmental, civil society organisation which focuses on the betterment of individuals through improvement of their general social, economic, spiritual and mental welfare. CBS seeks to influence national policy and promote greater collaboration with the government. The organisation advocates for a National Good Governance Plan that involves Government, Civil Society and the Business Community.

I spoke with both gentlemen over the weekend, as they prepare to be honoured by CSB for their decades of work in forging a stronger, more united society, utilising its power as the third arm of government.

“This is the time when we need to come together,” Mr. Miller declared, noting the interest of the current administration in communicating with and including CSB in national affairs.

“Civil Society Bahamas is for all non-profits, charities and associations in The Bahamas, working together to accomplish all the goals and ideals of its members. But it also consists of all those people, places and things working together to make society what it is. This is for all of us. We all come from civil society and we all return to it.”

Mr. Johnson concurred that the timing is right for CSB to be brought to the forefront and made to represent the interest of the Bahamian people. Encouraged by the engagement of the current administration, he made a clarion call for all NGOs, NPOs and associations to join now, adding that “unity is strength”.

He believes that as a unified voice, CSB can take a stand and assist the government in making the advancements called for by the public.

A pioneer in the Trade Union Movement in The Bahamas, Mr. Johnson has given his life to promoting the unions and civil society, in the spirit of promoting the common man. Calling them “primary producers”, Mr. Johnson says a part of the success of the country lies in the economic empowerment of people such as public service drivers, straw vendors, and longshoremen and women.

People on the frontline of the number one industry, tourism, he said, must have a voice, must have a place at the table of decision making, and must be economically empowered to become owners in their country. These primary producers, he said, were the ones who led the General Strike of 1958. They led the fight that brought about majority rule. As the country approaches its 50th Independence, Mr. Johnson adds, they must be celebrated.

“The revolution is still ongoing, because until we become economically independent, our job is not done,” Mr. Johnson said.

“I believe the basis for achieving economic independence is now here. All we need is to have a unity of purpose for this to succeed.”

The call for unity is echoed by Leonard Archer, who will also be honoured by Civil Society Bahamas in a gala awards banquet to be held on October 7. A veteran in foreign affairs, Mr. Archer was first introduced to CSB while employed at the Ministry of Foreign Affairs. Upon his retirement in 2007, he increased his involvement and advocacy, noting the power of the people to improve their society.

He spoke of the importance of not only national, but regional support. Therefore, CSB came under the umbrella of the Caribbean Policy Development Centre (CPDC).

Back in the early 200s, when the government was in talks with the citizenry concerning the treaty of CHAGARAMAS (to establish the Caribbean Community, including the Single Market and Economy), Mr. Archer became involved as meetings were led by the Ministry of Foreign Affairs. Citizens representing various factions of society saw the usefulness of banding together with a single voice representing Bahamian society. Therefore, meetings continued.

Eventually, CSB was born, and the CPDC encouraged members to seek widespread support, noting that “there wasn’t enough involvement of the ordinary citizens of the country in the affairs of the country.”

“There ought to be special mechanisms whereby the government hears from the people,” Mr. Archer pointed out.

“If you are my representative (Member of Parliament) you are supposed to do what I would like for you to do. I believe very strongly that citizens ought to be involved in what the government does. If you are working for me, and I am paying your salary - if I let you in office, you ought to listen to me about what I want and need, and your actions should be accordingly.”

Civil Society Bahamas has been active over the years. Mr. Miller shared about the years of work put into the Civil Society Act. This proposal was thwarted, he said, when a Non-Profit Organization Act 2019 was “hurriedly” passed in Parliament, based on pressure from international organizations. That Act, he said, still conveniently left out issues of campaign finance reform, which CSB has been agitating for.

He noted that political parties themselves should be registered with CSB, but shy away based on the level of transparency and accountability that CSB requires.

“When governments find a solution, they choose to put people in the leadership position of commissions who really are not interested in it. We need people with passion filling these social contracts.”

CSB has documentation with tangible advice for immigration, economic empowerment and other issues that have merit considering what society faces today. For those who are truly passionate about change, Mr. Miller said, they should join hands with the CSB and speak with a unified voice.

Mr. Miller, Mr. Johnson and Mr. Archer are among three honourees who will be highlighted at the Distinguished Leaders Awards Banquet on Friday, October 7, 2022 at the Willamae Bridgewater Convention Centre, formerly the Bahamas Communications and Public Officers Union (BCPOU) Hall on Farrington Road. The event starts at 7pm, and tickets can be purchased from the BCPOU office. To become involved with Civil Society, visit civilsocietybahamas. org or email civilsocietybahamas@gmail.com.

These honors must all be in line and not clash with the national political directorate and not reasonable substance of proof benefits. You kick the political heels with raw data and you are ostracized. With 75% of homes ram by single mothers, 20% are married homes with a father present we must dare look at the myriad of negative and positive possibilities. But who dare mention the lifestyle of the majority of voters who happen to be female. They become prime targets for control during electioneering because of vulnerabilities. Terry should be able to produce data on fatherless clients, so too Mr Ried and the Department of Corrections. Female empowerment that excludes the fathers in home just money and things makes females vulnerable and male sons are left to the social and environmental forces where a bullet becomes the only known source of discipline. UofB Professor of Psychology attempted to open discussions within the national dialog on Transactional Analysis & PAC that addresses parent child adult cross currents during stages of our lives. Some behaviors are direct repetitions of a parent but as we grow in wisdom utilizing the collective wisdom of our Frontal Lobe we should make corrections and adjustments. The element of threat, fear and top dog is preventing us reaching plateaus in research and academic development. Again my boy or my girl of politics weigh more sway at the gates of academics.

Many in Civil Society are out of the Consultancy loop, and those who are in the padded loop don't know what they they don't know but stagnates growth out of blind greed meanness or fear.