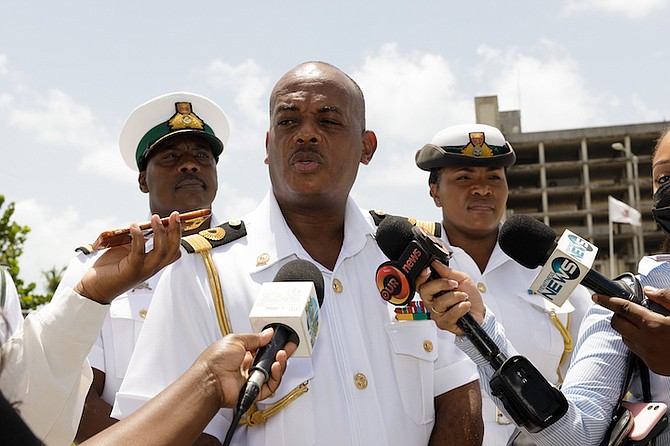 ROYAL Bahamas Defence Force Commodore Raymond King says he plans to meet with government officials next week to present them with capital development plans the agency wants to have executed to help expand operations and enhance its crime fighting capabilities.

Commodore King said the proposal includes the acquisition of properties as well as the construction of additional lodging facilities, mechanical workshops, new RBDF bases among other things.

He also estimated the capital works could cost in excess of $100m, but noted that he will have a better idea of the actual price later this week.

“I have a meeting planned with my capital development team this week, in which that formal plan and the costing should be completed and I look forward to presenting that to the honourable minister and the government sometime next week,” Mr King told reporters yesterday.

“The government’s intent is to pursue those development aspects by way of private public partnership and so we are seeking to specify everything that is needed for the expansion of our bases and our operations throughout the Commonwealth of the Bahamas.

“We want to simply get it right so you want to ensure its accuracy and that will be presented to the government which would lead to either an expression of interest or requests for proposal being settled to the public to invite private investors to come on board.”

He also outlined what the RBDF exactly needs and why.

Mr King said: “Some of the items needed include additional lodging facilities for our men and women who will be stationed in those areas for a sustainable period. We need mechanical workshops, we need aircraft hangars (and) we need to, in some cases, acquire property, particularly in the northern Bahamas, for a base to be in Grand Bahama, as well as Abaco, and even in Bimini.

“And so that includes logistics to include facilitating our vessels being able to berth within these islands and for us to operate our coastal radar, which we anticipate from the United States government. We have four that have already been approved and to include our drone operations along with drone operations, which we expect to be co-located and so the lodging, the maintenance and the operations needed comprise of costs needed and the items needed to have sustainable operations throughout the length and breadth.”

In terms of manpower, the RBDF chief said officials are hoping to add some 125 new recruits by mid-October.

He said nearly 1,900 officers are currently working for the RBDF but noted that officials would ideally like to have 3,000 members as a result of a manpower audit that was conducted by the agency.

He added: “So, we continue to build but at the same token, we still have that attrition rate of some 3.5 percent. We normally lose about 45 persons annually for various reasons.”

Yesterday, the RBDF commander also commented on their efforts to crack down on illegal migration activity.

“Well, within the last two months, we would have had three migrant interdictions within the Commonwealth of the Bahamas,” he said. “We also still have that trend with Cuban migrants leaving Cuba towards the United States.”

“Our partners are making those intercepts and in the Southwestern Bahamas around the Cay Sal Banks and handing those persons over to us and we still have the trend with mixed nationalities who enter The Bahamas legitimately and before the end of their visas, they would either move towards the northern Bahamas to be a part of those smuggling rings to the United States.

“Those are some of the trends that we are seeing that we are countering with our sister law enforcement agencies and we continue to reach out.”

US Special Forces as I post my communication, are so prepping for landing in Haiti, so as the tense moments mounts, how assured can our popoulaces' be that, yes, our Defense Force Commodore Raymond King. Under the order of the security minister to stand guard aboard all our Royal Defense's battle ready ships out patrolling sea waters here at home ― Yes?

... one thing is consistently true, this country NEVER gets value for money!

Becoming an independent sovereign country had many downsides, The country could have had a proficient and professional marine force guarding our borders at no cost, instead we have plenty of bent up propellors from boats running up on reef.

Every 5 years the defense force gets plenty money for capital improvements and yet nothing much happens. Who's place is being improved?

The RBDF needs to decide between Bimini or GB because having a base on both is a waste.

We need 1 northern base, 1 central base, and possibly 2 southern bases.

Need a base in central Abaco. We're financing a large portion of the economy whether you like it or not.

So, less than 10 years ago, the Govt spent $250million on RBDF upgrades. We are not sure whether that was fully completed and that we are getting value for money from that. Now RBDF is asking for another $100 million?