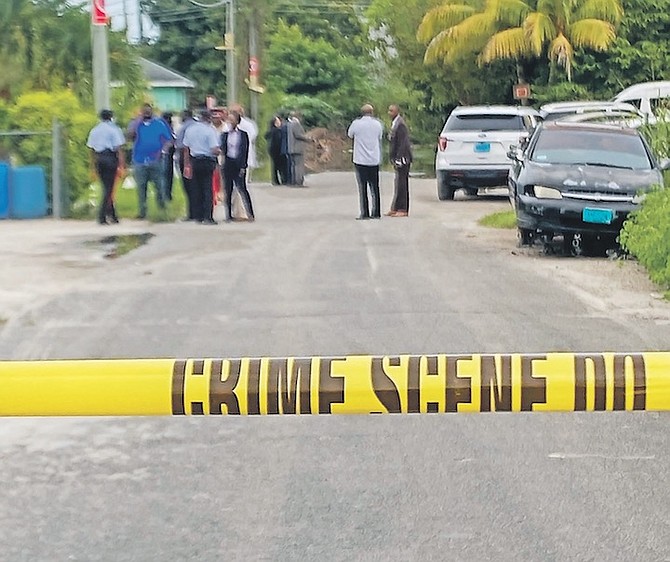 THE SCENE of the police shooting in Gamble Heights on Monday.

RECENT police-involved killings in the capital have raised concerns about the status of Coroner’s Court cases regarding these matters.

On Monday police shot dead a wanted suspect in Gamble Heights after he allegedly pulled a gun on officers.

This was the second fatal police-involved shooting in two days, as police said a teenager allegedly involved in an armed robbery was fatally shot on Saturday after pulling a gun on officers.

The frequency of fatal police-involved shootings in the country and the lack of public inquests to determine if they were justifiable is concerning to some.

Among them is Christina Galanos, who when contacted for comment yesterday, said while the shootings themselves were concerning it was even more troubling to her that inquests into these matters were not being conducted regularly.

“The Coroner’s Act actually mandates that every police killing ought to be followed by an inquest to properly investigate the proceeding, or the circumstances of the death,” Ms Galanos told The Tribune yesterday.

Two years ago, inquests into police-involved shootings were initially delayed because of COVID-19. In April, National Security Minister Wayne Munroe confirmed that police-related coroner’s inquests had not yet resumed as the director of public prosecutions has yet to appoint a lawyer to marshal the cases.

The Tribune contacted officials over the past few days for a status update on inquests into police shootings, however, no one could give an update.

Yesterday Ms Galanos noted the court system has faced some challenges and perhaps more resources could be sent to the judiciary.

The attorney told this newspaper addressing police-involved killings is urgent because it affects the public’s confidence in the police force.

“What is going to happen is that the public confidence in the police force is going to whittle away where persons are being killed by police officers, rightly or wrongly, because there are justifiable police involved killings. But that needs to be properly determined by a court. And if we don’t get down to doing that, sooner or later, the public confidence in the police force and the court system is going to go down - is going to decrease. So, I think we need to act with a matter of urgency to get it up and running.”

In August, Police Commissioner Clayton Fernander said officers have “the right to do what they have to do” when confronted with armed people who put their lives in danger.

He added that the police are not “in the business” of letting off “warning shots” in these situations.

In late August, police said a man was shot and killed when he produced a handgun and engaged the officers. At the time, police said officers from Operation Ceasefire responded to information about people with illegal handguns on a property on Miami Street, between Cordeaux and Balfour Avenues.

In April, a man wearing a bulletproof vest was shot by police when they responded to an armed robbery after 1am in the area of Delancey Street.

In January, a police officer shot and killed a Royal Bahamas Defence Force officer who allegedly “charged” at him and tried to disarm him.

Last year, 21 police-involved shootings were recorded, of which 13 were fatal.

The Tribune had previously reported that The Bahamas has one of the highest per capita rates of police involved killings in the world, with 11 recorded in 2017, 2018 and 2020.

This was a bad kid who pulled a gun. Justice served. As long as the police don't shoot good people. So far I haven't heard of any good people being shot by police.

Was he the one who robbed 700 Wines on Bernard Road earlier in the month?

What is there to be concerned about? Commit a crime against society, get removed from society. It is a simple concept.