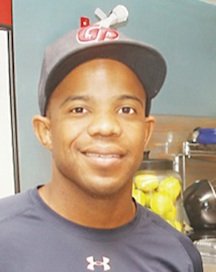 Ministry looking to 'get on base' with New York Yankees

NEW YORK CITY — The Bahamas Ministry of Tourism is looking to ‘get on base’ with the New York Yankees, seeking a partnership with the popular Major League Baseball (MLB) team.

A Richardson gets second call-up to major leagues

For the second time in his pro career, Antoan Richardson received the promotion every minor league player dreams of - a call up to Major League Baseball.

Richardson prepares for next phase of career with the Yankees

AS he prepares to head into the next phase of his minor league career with the New York Yankees, Antoan Richardson continues to receive accolades from his winter league play.

ANTOAN Richardson has moved one step closer to playing in the Major League of Baseball again, this time in the farm system of one of the most popular franchises in all of sports.

Richardson back from injury

An ankle sprain relegated Antoan Richardson to the disabled list for approximately three weeks, but the veteran outfielder made his return just in time as the Rochester Red Wings are set to make a playoff run.