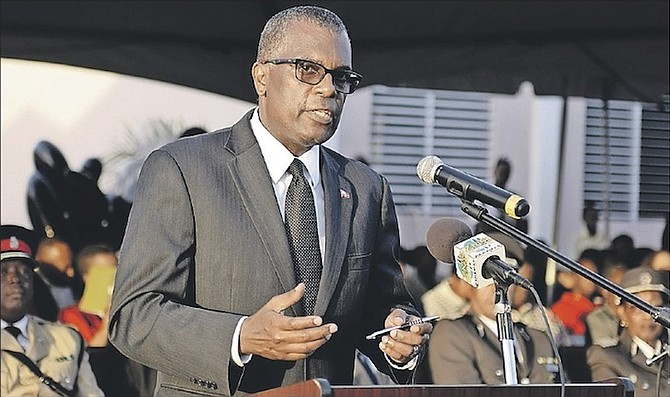 The ‘fix is in’ on Lighthouse Point project

PROGRESSIVE Liberal Party Chairman Fred Mitchell yesterday said it appeared as if the “fix is in” on Lighthouse Point.

‘No role for DPP in social media war’

PROGRESSIVE Liberal Party Chairman Fred Mitchell yesterday condemned the tone struck by Minister of Education Jeffrey Lloyd in his comments on the firings of dozens of contract workers, calling the minister compassionless and shameful. Mr Mitchell,

PLP Chairman: Foulkes may have to fight his own party over shanty towns

THE government’s proposed census of shanty town communities could be slowed by persons within the Minnis administration, according to Progressive Liberal Party Chairman Senator Fred Mitchell, who on Friday suggested the promises made by the government before the 2017 election could limit its “political will.”

HOUSE Speaker Halson Moultrie’s recent comments in Parliament have drawn the ire of opposition Senator Fred Mitchell, who accused the Speaker of committing a “blood libel” against him, adding he would seek “adequate compensation” for this grave injustice.

SENATOR Fred Mitchell has demanded an apology from Finance Minister K Peter Turnquest, saying his comments regarding the former Christie administration’s handling of $42m from a $150m loan borrowed in the wake of Hurricane Matthew were “misleading”.

Mitchell: Constitution says who is automatically a citizen

Mitchell: No impropriety in foreign missions

FOREIGN Affairs and Immigration Minister Fred Mitchell yesterday defended his ministry’s decision to bar an international human rights agency from the Carmichael Road Detention Centre, insisting that the move was due in large part to the organisation’s connection to local groups alleged to be orchestrating plans to “destabilise” the government.

THE Ministry of Foreign Affairs has officially launched its new polycarbonate e-passport system.

FOREIGN Affairs and Immigration Minister Fred Mitchell has hit out at a “rubbish” statement made on a US television news show by a reported expert in security and terrorism who portrayed the Bahamas as having terrorist links.

The Ministry of Foreign Affairs released this statement on Saturday evening, after a report on US media:

FOREIGN Affairs and Immigration Minister Fred Mitchell last night promised that the PLP would triple the country’s immigration force, expanding it from “300 to 900” in the next term if elected.

Repatriation of Cubans rises by 80 per cent

REPATRIATIONS of Cuban nationals skyrocketed last year, according to statistics from the Department of Immigration, which indicated that total repatriations increased by some 80 per cent over 2015.

Mitchell hits out at ‘hateful’ criticism by attorney Fred Smith

FOREIGN Affairs and Immigration Minister Fred Mitchell yesterday “categorically” denied that he or any minister of the government “hacked into any emails” or attempted to have environmentalists from Save the Bays (STB) arrested.