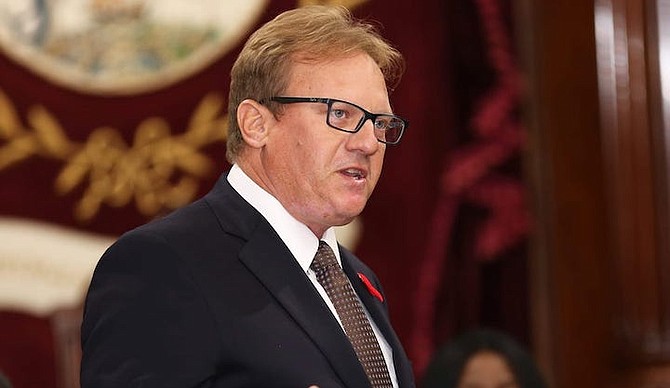 THE Bahamas will suspend the automatic exchange of financial information with Russia on its citizens, according to Attorney General Ryan Pinder yesterday.

A Cabinet minister yesterday slammed the Government’s “lackadaisical” efforts in ensuring investors live up to their Heads of Agreement obligations, adding: “There’s plenty of blame to go around.”

A DOWNTOWN Nassau resort that has defaulted on its debt is due to be sold to a major UK-based hotel group in a deal set to close on February 22, it was revealed yesterday.

Bahamas targets ‘40 out of 40’ compliance

The Bahamas is aiming to be “40 out of 40” and achieve near-total compliance with global anti-financial crime standards this year, the attorney general said yesterday.

The Bahamas’ removal from Europe’s blacklist “sets the stage” for financial services growth by eliminating the last “red flags” to doing business with this nation, a Cabinet minister said yesterday.

THE Office of the Attorney General will investigate the environmental liability attached to a collision at sea that resulted in a gas tanker sinking off the coast of New Providence.

AG: Several tools added to deal with international requests for exchange of information

The Attorney General has provided an insight on the government’s case management system to help facilitate the management of responses to international requests for exchange of information.

The Bahamas must “aggressively advance” the building of a yacht registry to capture a greater share of the business that passes through its waters annually, the attorney general said yesterday.

AG says locations reviewed for use as specialist courts

ATTORNEY General Ryan Pinder said officials are in the process of reviewing appropriate locations for speciality courts to ensure the proper administration of justice.

Pinder slams Minnis for not having seen IMF report

FORMER Prime Minister Dr Hubert Minnis’ admission that he did not see the International Monetary Fund’s report recommending a VAT increase to 15 percent was criticised yesterday as evidence that he was “not fit for the job” of leading the country.

ATTORNEY General Ryan Pinder yesterday congratulated the Industrial Tribunal on the technological advancements it made over the last year to improve court services during a ceremony to mark the opening of its legal year.

THE Senate last night passed legislation that will lead to the end of suspensions of certain provisions put in place under the state of emergency.

A Free National Movement member of Parliament has accused Attorney General Ryan Pinder of making comments that are “destabilising to the very administration of justice.”

ATTORNEY General Ryan Pinder said he has requested the Judicial and Legal Services Commission to terminate the contracts of two non-Bahamian lawyers who were appointed to senior posts in the Department of Public Prosecutions under the former administration.