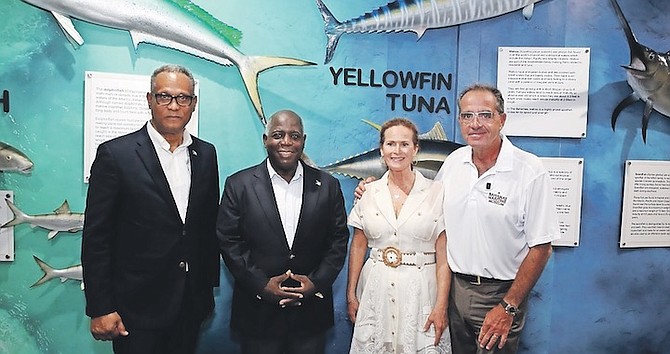 THE BAHAMAS Maritime Museum was officially opened on Saturday, August 6 with a Ribbon Cutting Ceremony held at Port Lucaya Marketplace. Keynote speaker for the event was Prime Minister and Minister of Finance, the Hon. Philip Davis, and giving remarks on behalf of the Minister for Grand Bahama was Minister of Health and Wellness, the Hon. Dr. Michael Darville. Shown from left are: Minister Darville; Prime Minister Davis and Gigi and Carl Allen, owners of Allen Exploration.
Photo: Andrew Miller/BIS

What’s it all worth? We still don’t know

The curator of the new Bahamas Maritime Museum says the government - through the Antiquities Monuments & Museums Corporation (AMMC) - have their portion of Spanish treasure found off the coast of Grand Bahama.