The Water and Sewerage Corporation’s (WSC) executive chairman forecast that multiple “commissionings” for new water infrastructure will take place during 2021.

The Gaming Industry and our economic recovery. This is my second article in a series of articles that I am writing with ideas that in my opinion would boost the Bahamian economy.

A South Eleuthera business owner yesterday described the Water & Sewerage Corporation’s planned takeover of the area’s water production as “disconcerting” and not representing “a step forward”.

Implementation of the tax on web shop patrons' winnings has been pushed back two weeks to January 16 to allow the Government to provide all those impacted with sufficient notice.

Back to school with little sales bump

Retailers are holding their breath for a bump in sales stemming from whatever form schools reopen next month.

Dismal start to the year for Port Lucaya Marketplace

The Straw Markets are closed and there are no visitors buying authentic souvenir straw crafts or browsing the stores and eating in the restaurants at Port Lucaya Marketplace - making it a dismal start to 2021.

Stealing from the poor

I am writing this letter to you because I am fed up with the unscrupulous practices by merchants across the Bahamas. The stores have decided to take on the reversed philosophy of Robin Hood. In my opinion it is the perfect example of the rich stealing from the poor.

GRAND Bahama Police arrested six persons for shop-breaking and stealing after numerous items were discovered at a residence in Eight Mile Rock. 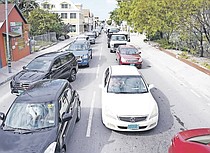 TRAFFIC jams this week as the streets filled up with people sending packages on the ...

Grand Lucayan feels the ‘chill’ with no A/C

The Grand Lucayan’s chairman yesterday blamed the resort’s recent closure to overnight guests on an inferior water supply that “rotted our chillers” and left it without air conditioning.

Craig Flowers’ FML web shop chain has defeated a $1m constructive dismissal claim by a former senior executive who was found to have “abandoned” his post following a probe into “irregularities”.

THE first shipment of reverse osmosis units has arrived in Grand Bahama for construction of a new three-million-gallon RO plant being built at a cost of $5m by the Grand Bahama Utility Company.

A Bahamian manufacturing advocate yesterday said it would be "beautiful" if the Government fosters greater “linkages” between local producers and major resort and real estate developments.