Digital assets ‘shot in the arm’ sparks accountants to reunite

The Bahamas’ entry into the digital assets space sparked two well-known accountants to speed up their reunion after a decade apart by merging their two firms with effect from yesterday.

Digital assets industry 'a major opportunity' for the Bahamas

PRESS Secretary Clint Watson said the government is working with key stakeholders to ensure that Bahamians can benefit from the digital assets industry.

DIANE PHILLIPS: What it takes to breathe new life into historic Nassau

PARTS of this column first appeared nearly five years ago. Sadly, it remains all too relevant. The Tribune has agreed to re-run it today at my request in light of the Davis administration’s commitment to rescuing and resuscitating the historic city of Nassau.

PRIME Minister Philip “Brave” Davis has given a glimpse into what his administration’s plan for economic and climate resiliency for The Bahamas will look like amid an inflationary climate and a looming hurricane season.

A MAN was charged in Magistrate’s Court yesterday in connection with a series of thefts on Paradise Island that included over $5,000 worth of smart TVs and almost $200 worth of alcohol.

PRIME Minister Philip “Brave” Davis said the arrival and presence of FTX underscores the “readiness of The Bahamas to be a home for global leaders in the crypto space.”

Thank you for rescuing me

I am writing this letter in the hopes that it may be read by the wonderful, caring couple who came to my aid last Saturday night.

Every time I drive through downtown Nassau it depresses me.

PRIME Minister Philip “Brave” Davis said FTX Digital Markets’ groundbreaking for its headquarters sent a strong message that The Bahamas is a safe place for international companies to set up shop.

Larson a victim of fragility?

I must confess from the outset that I too had joined the chorus of irate Black Bahamians subsequent to revelations in Parliament by Prime Minister Philip “Brave” Davis that the former Free National Movement (FNM) government had paid Susan Holowesko-Larson $1,750 per week to chair the National Food Security Taskforce.

THE Bahamas always benefited from nefarious activities; giving shelter to crooks and shady characters is a historical fact. From 1698-1718, The Bahamas became the world’s capital of piracy. New Providence was sprinkled with whorehouses, motels and shops that catered to pirates. The records will bear witness to corrupt politicians, even governors, of that period, taking bribes and a share of ill-gotten loot.

The Moody’s verdict on the state of The Bahamas

Any endeavour that does not seek answers and direction for improvement is but a frolic. 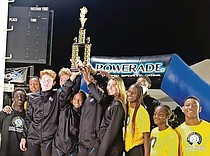 BAHAMAS Aquatics has won its fourth consecutive title, its eighth in nine years - and ...

Just before wrapping up their fourth consecutive title and eighth in nine years, Bahamas Aquatics got the confirmation that the Bahamas has received the bid to host the 2024 edition of the championships.

A MAN was remanded to prison yesterday after being charged with murder.

WHAT to cover in a weekly column needs to be determined well in advance in order to leave time for research.

HUBERT EDWARDS: The Moody’s verdict on state of The Bahamas

In the first of a two-part series, Hubert Edwards examines the implications of the rating agency's assessment for the country's economic and fiscal outlook.