THIS WEEKEND, the members of Playhouse Entertainment will prepare to hit the town in full force as they stage a series of events in celebration of their fifth anniversary.

We want truth over generators

Serious allegations have been thrown at BP&L over the process of the questioned RFP for the placement of Aggreko standby generators and we read today a statement-comments from the GM and we have to ask – which world is he living?

There is no doubt if there is a single economic shackle around all of our necks it has been BEC-BP&L high electricity bills.

Questions over BPL and URCA

There is a headline today: URCA to investigate BPL fires attributed to URCA’s CEO Bereaux. With respect to Mr Bereaux where is the investigation as to why BP&L who are totally governed through URCA did not apply under Articles…15…25-28 for permission to change the type of generation and fuel at Clifton?

BP&L - do I believe there is any enquiry going on? No. The enquiry anyway should be on the Shell America deal and BP&L not complying with URCA.

BP&L…receivables of at least $91.6million unsure if that includes what Government owes them, which usually is in excess of $30 million so BP&L are owed a whopping $115 million!

I am so pleased to be able to write this letter about my successful experience with Road Traffic this month!

A little more digging would be in order

URCA is alike a mouse that roared…is it impotent?

Were all generator bidders invited to conference?

PLATTS Caribbean Energy Conference this week I have to ask did the presence of the Minister responsible for BP&L - the Chairman and the CEO probably by accident compromise the required independent position as a result of the valuable pending RFP result for the supply of Stand-by generators to BP&L? 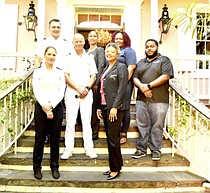 One of L’Oreal’s leading educators visited to Nassau recently to show Bahamians the latest trends in hair colouring techniques.The ‘Colour Me Matrix’ event was hosted by the Bahamas Supply Agencies at the British Colonial Hilton. Those in attendance

Is BPL abiding by the rules?

BP&L’s RFP to replace the current standby generator supplier - AGGREGO was it complaint to the Electricity act of 2015?

Remember pre-election, hard mouthed the FNM were, on renewable energy especially solar? Where is it today? Silent as a house mouse.

All not well at BPL

BP&L - 80MW stand by generator RFP - are we supposed to accept what clearly from the letters published by The Tribune accept that the process was compliant with the norms? There was a serious breach of the Electricity Act 2015 and URCA who is responsible still is pussy footing around not doing what it supposed to do.