Man must compensate brother for fight

A MAN was ordered to pay $3,000 in compensation and bound to keep the peace for one year yesterday after admitting to stabbing his brother during a fight.

Williams in the win column

AFTER taking a brief break from competing at the Commonwealth Games, Rashield Williams returned to the pro ranks where he secured another impressive victory. 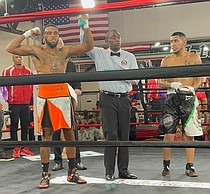 RASHIELD Williams’ arm is raised by the ring referee after he won his fight on ...

POLICE are investigating a second homicide in as many days after a man was shot dead yesterday morning off Hamster Road.

WNBA Finals: Jonquel Jones and the Sun are eliminated

THE 2022 season ended on a disappointing note for Jonquel Jones and her Connecticut Sun.

THE lifting of the mask mandate is a major moment in the history of the pandemic in our country. It will also likely prompt mixed feelings for Bahamians.

A CABINET minister yesterday affirmed that the proposed $535m Bahamas Power & Light (BPL) refinancing is not being “pursued at this time” but was less definitive on Shell’s New Providence power plant deal.

The Chief Justice’s ruling on an Exuma cay was yesterday hailed as “a deterrent to frivolous and vexatious” land ownership claims that undermine economic growth, investment and development in The Bahamas.

US House Speaker Nancy Pelosi’s recent visit to Taiwan was provocative, reckless and dangerous. The visit, which was the culmination of misguided US moves to challenge China’s core national interests, left the political foundations of China-US relations shaken and drew an expectedly strong reaction from China.