Jr Pan Am: Swimmers reach the B Finals

TEAM Bahamas opened competition at the inaugural Junior Pan American Games in Cali, Colombia, with the triathlon and swimming events first on the schedule.

A warm welcome for Virgin flight

THE Toledo Rockets opened a week of NCAA basketball at the inaugural Baha Mar Hoops with the first win in the series of tournaments. 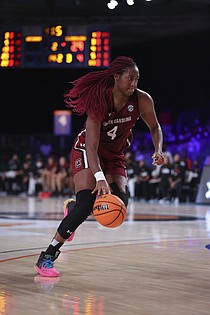 The inaugural Bad Boy Mowers’ Battle 4 Atlantis Women’s Tournament will conclude with an epic matchup between the top two teams in all of college basketball.

Battle 4 Atlantis to give tourism boost

The two Battle 4 Atlantis basketball tournament will bring a combined 7,000 visitors to The Bahamas over the Thanksgiving period, creating “exponential” tourism benefits for the country.

A PAIR of Bahamian football players have garnered collegiate offers following successful seasons at one of the newest rising prep programmes in South Florida.

Several of the elite NCAA Division I women’s basketball programmes are due in the capital this week for one of the most anticipated early season tournaments on the college basketball schedule.

AGAINST a backdrop of blue sky and perfectly manicured greens at the Ocean Club Golf Course, two Cabinet ministers, the CEO of ALIV and community leaders today threw their support behind a golf tournament aimed at raising $100,000 to help fund BAARK’s efforts to slow the stray pet population through spaying and neutering.

BEFORE she officially retires as principal of St Augustine’s College in December, the Athletic Department is planning to hold “Big Red Machine Madness” in honour of Sonja Knowles on Saturday, November 27.

ORGANISERS of the inaugural Potcake Golf Tournament are pictured with Minister of Youth, Sports and ...

TWO years after Hurricane Dorian destroyed Abaco, many residents still face immense hardship with some living in close proximity to raw sewerage and others living in cars.