GINGER Moxey MP speaking in the House Of Assembly.

US NORTHERN Command has delivered a third temporary kitchen unit to The Bahamas’ National Emergency Management Agency before the start of the 2022 Hurricane Season.

GRAND Bahama Police are still searching for the suspect/suspects in connection with two rape incidents and one attempted robbery incident that occurred in Freeport.

AN ACKLINS man was charged in the Magistrate’s Court yesterday with threatening a police officer and assaulting him with a vehicle.

Electric cars are a risk of electrocution

In the 2022/2023 Budget Communication, Prime Minister Philip Brave Davis announced that his government will reduce the duty rate on electric vehicles valued under $70,000 to 10 percent.

Why not celebrate the Queen?

Today, Her Majesty our Queen - Queen of The Commonwealth of The Bahamas became Queen of the Realm and the Colonies. Could not be a stranger story... not planned as certainly the abdication of her Uncle was far from expected which plunged her father George VI to be King and she, Elizabeth the oldest a potential Queen probably after a long reign of her father.

Minnis: Nation worse off under PLP

Less than 3 percent of $16.5m in creditor claims against a Freeport business, once hailed for pioneering The Bahamas’ entry into the stem cell therapy industry, had been accepted as at end-May 2022.

‘Still among leaders’: But Bahamas’ FDI down 60%

The Bahamas is “still among the leaders” despite a United Nations (UN) agency yesterday revealing that foreign direct investment inflows to this nation declined by 60 percent year-over-year in 2021 to $360m.

Vehicle theft claims ‘out of the ordinary’

A Bahamian insurer says an “out of the ordinary” increase in motor vehicle theft claims was among the principal factors why it missed profit projections for 2021.

The Government is hailing its VAT rate cut for producing a 62.8 percent year-over-year increase in revenues to $299m for the three month period that closed at end-March 2022.

The Bahamas’ $11.843bn national debt at end-March 2022 has dropped below this nation’s economic output due to the continued post-COVID-rebound, resulting in a debt-to-GDP ratio of around 98.4 percent.

ACTOR Matthew McConaughey holds a picture or Alithia Ramirez, 10, who was killed in the ... 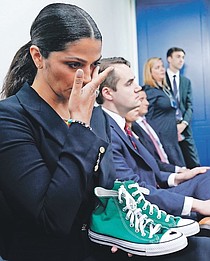