ROTARIAN Barry Rassin has been elected to become chairman of the Rotary Foundation of Rotary International for the year 2023-24. 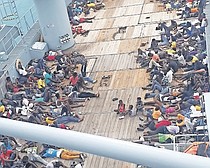 LUCIUS Fox Jr extended his hitting streak to 10 games to conclude his season of AAA baseball with the Omaha Storm Chasers.

MIAMI Marlins prospect Ian Lewis was recognised by the organisation as one of the top performers in its farm system.

A 29-year-old man who denied breaking into another man’s house was yesterday placed on a daily curfew leading up to his trial.

A man caught with $1,000 worth of marijuana and ammunition must pay $3,500 to avoid spending six months behind bars.

A MAN and a teenager were yesterday remanded to prison accused of killing a man and attempting to kill another earlier this month.

PNG (portable network graphic) is a type of image file that is often favoured in web design and creative projects involving Photoshop or similar software. It is a type of file that allows an object to be placed into software with a clear background or as a partially transparent image, making it especially useful when creating a graphic from multiple layers. PNG is one of my favourite image files.

Lucius Fox Jr nearly hits for the cycle, Thomas and G’Hoppers are runners-up

LUCIUS Fox Jr continued his offensive production for the Omaha Storm Chasers over their “Final Stretch” of the AAA season, while Tahnaj Thomas and his Greensboro Grasshoppers finished as runners-up in the High-A East League.

The Don’t Blink Home Run Derby In Paradise has a new title sponsor and will look to extend the event to include several new initiatives when it returns to Bahamian shores later this year.

Wake up and protect our patrimony

Today I came across a post of “The World” – a floating condominium anchored in Bahamian waters, which triggered the questions: when, who, how, what and why, and as I searched for answers, it brought into sharp focus our crucial need to act immediately and more responsibly with regard to recognizing, owning, protecting, and sustaining our natural resources, as well as putting strict laws in place to mitigate damage and receive retribution.

UNCASVILLE, Conn. (AP) — Courtney Vandersloot had the second triple-double in WNBA playoff history with 12 points, a league playoff-record 18 assists and 10 rebounds to help the Chicago Sky beat the Connecticut Sun 101-95 in two overtimes last night in the opener of their best-of-five semifinal series.

Shell North America (NA) yesterday said it remains committed to sealing its energy partnership with Bahamas Power & Light (BPL) despite the deal being placed under review.

LOURAWLS “Tum Tum” Nairn Jr achieved another career milestone on his basketball journey and received the highest honour from his alma mater.

CHIEF Justice Sir Brian Moree said yesterday a number of systemic problems have caused a backlog of cases at the courts, particularly when it comes to criminal proceedings.

Increase in abuse of elderly in Grand Bahama

THE Department of Social Services in Grand Bahama is seeing an increase in abuse and mistreatment of elderly people, particularly those with disabilities.