FOCOL Holdings’ chairman yesterday conceded that cleaning-up Exuma’s 30,000-gallon oil spill would have been “a much greater struggle” if the wind and tide had taken the slick in a different direction.

AN ESTIMATED 20,000 gallons of fuel have been recovered from waters in Exuma following Wednesday’s oil spill in the area, according to the director of environmental planning and protection department yesterday.

A Bahamian realtor yesterday disclosed his average property sales price has “tripled” compared to pre-COVID levels with one-third of all transactions realising either what the seller is seeking or higher.

FOCOL: ‘All resources we have’ to oil spill fight

FOCOL Holdings’ chairman yesterday pledged it was “deploying every resource we have” to clean-up the 30,000 gallon Exuma oil spill, and said: “We’ll do whatever’s necessary to stop it happening again.”

THIRTY-five thousand gallons of diesel spilled into the once blue and pristine waters off an Exuma bay as a vessel contracted by Sun Oil was offloading fuel to Bahamas Power and Light at George Town.

For many years, author and church ministry leader Dr LaTazia “Doctor Tazz” Stuart suffered silently with the secret of infertility and miscarriages, feeling ashamed and embarrassed even after finally having children.

INSIGHT: ‘Bahamas’ attitude on the rights of the disabled is deplorable and alarming’

JOB discrimination and limited employment opportunities for Bahamians with disabilities have facilitated in many ways my ability to reflect on the current status of young adults with disabilities who have attained degrees from higher educational institutions. I too reflect on their need for vocational rehabilitation services and the many challenges they face seeking employment. 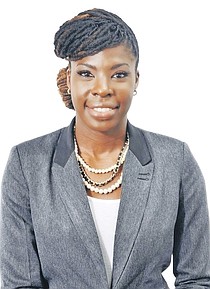 THE KDK REPORT: The other shoe

MANY years ago, I was employed as the chief resident for foot and ankle surgery at Mount Sinai Hospital in New York at both the main Manhattan and the smaller Queens locations.

EDITORIAL: Health system problems not dealt with in decades

THE problem with kicking the can down the road is that a day will come when there’s no more road.

Will a new Commissioner change things?

POLICE Commissioner Clayton Fernander’s pedigree, mostly CID-DIU, could change things, but the data on where the guns come from causes me, and should cause everyone, serious anxiety that little will change.

The Central Bank yesterday removed from its website a document seeking bids for a campaign “to mute” opposition to the elimination of cheques after the language used was questioned by Tribune Business.

Taxi plates...did I hear right immediately some 50, but eventually some 200?

Many consider Elon Musk to be the messiah of the global technology industry. But he got bogged down with his billion dollar plans to take over Twitter. And, at Tesla, the problems are piling up.

A controversial Austrian financier is preparing for a legal battle after his bid to acquire Abaco’s Treasure Cay resort property was rejected by the Government.

Getting to the root cause by killing seeds of crime

Allianz Global Corporate and Specialty (AGCS), in a June 15, 2022, report has predicted an increase in strikes, riots, violent protest and general social disorder on a global scale. This continued upheaval has been associated with the post-COVID fall-out, and the increased cost of living that comes with scarce basic human necessities. The United Nations secretary-general, speaking of the war in Ukraine, which has impacted more than 30 percent of the world’s wheat production, said in March: “All of this is planting the seeds of political instability and unrest around the globe.”

THE KDK REPORT: Spoonful of sugar

WORDS matter. Repetitive encouragement can strengthen a child who’s lost their way but a solitary negative comment, by contrast, can incarcerate that same child in a prison of self-doubt forever. Words, over time, can also begin to lose meaning. The word Diabetes some 20 to 30 years ago evoked intense worry among patients and their loved ones. Today it’s become so commonplace, especially here in The Bahamas, that it’s no longer taken as seriously as it once was.