Much has transpired in recent times regarding the national debate on Immigration reform.

KRAIGG Brathwaite became the first opening batsman to be unbeaten in both innings of a Test as he led West Indies to an absorbing five-wicket win over Pakistan in Sharjah yesterday.

The Bahamas will fall back into economic recession if consumers are unable to absorb Value-Added Tax’s (VAT) inflationary impact, a co-chair for the private sector’s Tax Coalition warned yesterday. 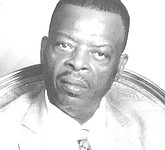 Each year more than 6,000 new students enter the job market.

The International Monetary Fund (IMF) yesterday upped the average five-year GDP growth rate that the Bahamas needs to both absorb new workforce entrants, and slash the existing jobless rate in half, from 5 per cent to 7 per cent as it urged this nation to rapidly tackle “structural impediments”.