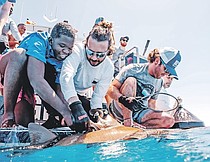 STUDENTS from LN Coakley High School in Exuma tag sharks with research scientists from Beneath ...

The Central Bank’s departing chief enforcer says it is “essential” that The Bahamas continue to beat anti-financial crime regulatory standards but do so without imposing “procedural overkill” on low-risk clients.

IN THE Bahamas, one of the first countries in the world to protect sharks, seven students from a small high school jumped aboard and in the water without a second thought to help tag Caribbean reef and nurse sharks under the watchful eye and professional guidance of research scientists from Beneath the Waves.

Gas prices are rising too high

A Bahamian bottled water supplier has endured "an horrendous June" after equipment failure and a "bonkers" supply chain cut production for the month by 40 percent.

Health insurance VAT: 'This is not about money'

The Government has undertaken not to change the VAT treatment of private medical insurance claims until a full study is done, its top finance official asserting: "This is not about trying to get tax money."

After Shock Amateur Boxing Show in honour of Ray Minus Jr

ROYCE Colebrooke, Devaughn Musgrove, Christian Thompson and John Saint Wrint were among some of the top performers on Saturday at the After Shock Amateur Boxing Show that was held in honour of Ray Minus Jr.

Health insurers have yet to meet the Prime Minister over VAT reforms that threaten to increase medical bills and healthcare costs, with the Government yesterday accused of “adding insult to injury” for thousands of Bahamians.

Throughout the Caribbean and in the many parts of the world where tourism reigns, tourism development organisations and agencies have reshaped the template for visitor experiences. The Bahamas’ own Tourism Development Corporation, in similar fashion, is poised to redefine how we deliver goods and services to the tens of millions of tourists who visit our shores annually.

Crowdfunder aiming to be ‘next Bamboo Shack’

A Bahamian restaurant entrepreneur yesterday unveiled ambitions to become “the next Bamboo Shack” after raising almost one-third of his minimum $320,000 capital target within the first ten days.

Bahamasair’s top executive yesterday voiced optimism that a fuel bill which has skyrocketed by up to $200,000 per week “won’t suffocate” travel demand despite the airline readying “another small” fare increase.

‘No break’: Property cover to stick near all-time high

Bahamian insurers are seeking “an urgent meeting” with the Prime Minister before the week ends over VAT-related reforms that will potentially increase medical bills and treatment costs for thousands of Bahamians.

PETER YOUNG: Like a cat with nine lives Boris survives again – but the road ahead looks bumpy

AFTER  all the superlatives about The Queen’s Platinum Jubilee last week and the lifting of people’s spirits throughout the country, the politicians and the trade unionists in Britain have managed to bring the nation back to earth with a bump.

A grooming policy should reflect the needs of the employer while not unnecessarily restricting an employee’s individual expression. The more formal or professional the culture, and the more employees interact with individuals outside the workplace, the greater the need for employers to have a policy governing employee grooming and hygiene.

Suspected case of Monkeypox being monitored

The Ministry of Health has released a statement regarding a potential case of Monkeypox: