Bahamian blood on US Second Amendment

Prime Minister Philip Brave Davis’ startling claim that 90 percent of confiscated guns used in murders in this country have been traced to American manufacturers and firearm retailers suggests to this writer that the 2nd Amendment to the US Constitution is stained with Bahamian blood.

TRAVIS Munnings and his Portuguese club advanced to the league final while Zane Knowles and his Bulgarian club received a favourable ruling in arbitration to keep their playoff hopes alive.

Had PM Davis been in Volodymyr Zelensky’s shoes, I would want him to do the following:

THE Bahamas Union of Teachers is concerned about the capacity of the Ministry of Health and Wellness to facilitate proper contract tracing in the face of COVID-19 cases in schools and communities.

Teachers: Use wisdom over shutting schools

THE Bahamas Union of Teachers is “closely monitoring” the spread of COVID-19 in public schools, its president Belinda Wilson urging the Ministry of Education to “utilise wisdom” as examinations get underway.

WHILE the weather did not cooperate over the weekend at the Roscoe Davies Soccer Complex, this did not dampen the spirit of the competitors in the men and women divisions of the Hummel Cup Soccer Tournament.

‘One more big investment’ to turn around GB fortunes

Grand Bahama businesses are “optimistic” on the prospects the Carnival Cruise Line groundbreaking ceremony for its new port destination gives for the island, but say that the island needs one more huge investment for it to turn the fortunes of the residents.

WORLD VIEW: Abortion is a woman’s right - legalise it

STATESIDE: Why is Kremlin reportedly planning a grand celebration of its military?

THIS Sunday is celebrated generally in the West and specifically in the US and UK as V-E (Victory in Europe) Day, commemorating the Allied triumph over the Axis powers in World War II. May 8 was the date in 1945 when the German army surrendered to the victorious allies led by America and Great Britain.

AN exhibition is being held by artist Jé-Rome Harris Miller, titled Colours of Celebration 2022. The event will be held tonight at the Dean Patrick L Adderley venue at Christ Church Cathedral Hall on George Street, at 6pm.

AN exhibition is being held by artist Jé-Rome Harris Miller, titled Colours of Celebration 2022.

BY its nature, news reporting has to be selective. Editors worldwide determine what is of interest and whether, for a variety of reasons, it should be brought to public attention and is worthy of publication.

Based on a March 25 Tribune article on Bobo Ashanti members of the Ethiopia Africa Black International Congress (EABIC), I am inclined to believe that these Nassau-based Rastas were unhappy about the visit of the Dutch and Duchess of Cambridge to The Bahamas. It was either on the 26 or 27 of March when Prince William posted on Twitter a moving tribute about the resilience of Abaconians some two-and-a-half years removed from Hurricane Dorian.

AS competition is slowly coming back on stream, The University of The Bahamas men’s soccer team is getting ready for competition with a series of scrimmages. 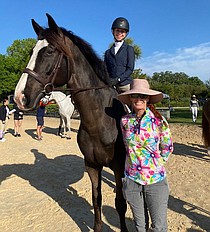 A MAN suffering from mental illness was charged in the Magistrate’s Court for a string of robberies in Andros.

STATESIDE: ‘Subtext’ in the crisis in Ukraine

ELAINE is a New Yorker who has travelled extensively and worked overseas, including in the Caribbean where she fell in love with The Bahamas. She is definitely “woke.” To describe her as a fervently liberal anti-Trumper is a huge understatement.