THE Duke and Duchess of Cambridge were greeted to a red-carpet welcome that included live performances and local fanfare in a brief ceremony held at Lynden Pindling International airport yesterday.

Police say they are aggressively searching for a man who shot and killed a woman at Arawak Cay early on Sunday.

A TROPICAL STORM WARNING REMAINS IN EFFECT FOR THE ISLANDS OF GRAND BAHAMA & BIMINI .. RAIN BANDS FROM HURRICANE IAN WILL CONTINUE TO AFFECT NORTHWEST AND CENTRAL BAHAMAS THROUGH FRIDAY..

Dead fish in video 'probably from catch that was dumped'

A VIDEO of scores of dead fish scattered ashore on Delaporte Beach made the rounds on social media yesterday causing concern.

THE National Emergency Management Agency continues to closely monitor the track of Hurricane Ian which forecasters anticipate could bring heavy rainfall to the northwest Bahamas. 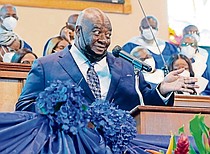