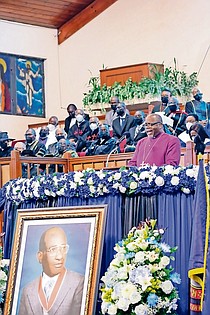 PM: Climate issues will only get worse

PRIME Minister Philip “Brave” Davis told heads of government that as the world enters a new climate era, the situation will only get worse requiring binding commitments instead of statements alone that have been used to postpone real action.

The Bahamian connection for the Benedict College Tigers men’s volleyball team had their run in the Southern Intercollegiate Athletic Conference Championship tournament end in the semifinals.

From The Bahamas Department of Meteorology:

DWIGHT Coleby is off to an impressive start with his new club - Heroes de Falcon - in the Venezuelan SuperLiga. The veteran frontcourt player is averaging 9.4 points and a team high 7.8 rebounds per game. He also leads the team in blocks at 1.6 per game, while shooting 53 percent from the field in 25 minutes per game.

THE Office of the Spouse will reach out to victims of sexual violence and domestic abuse and partner with organisations in the coming weeks in its continued and committed fight against these issues.

Island tennis teams up with Baha Mar to stage tournament

LOCAL forecasters are advising the public to be vigilant as a new weather system heading for the southeast Bahamas gets closer.

THE government has officially launched phase one of the public private partnership to design, build, finance, operate, and maintain several airports throughout The Bahamas.

This is an open letter to Alfred Sears – Water & Sewerage Corporation