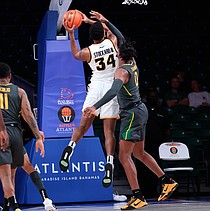 JONQUEL Jones posted her fourth double double of the season in her return to FIBA Women’s EuroLeague play.

TEAM Bahamas finished 6th in the U12 TITF/ COTECC Team Finals Competition in the Dominican Republic.

TWO teams headed in opposite directions - Shamar Burrows and the Dalhousie Tigers maintained their national ranking with a three-game winning streak while Qyemah Gibson and the St Mary’s Huskies lost their third game in a row.

Bahamas suffers loss in pivotal tie, misses out on spot in semifinals

TEAM Bahamas lost a pivotal tie at the ITF/ COTECC 12U Team Finals and missed out on a spot in the semifinals.

PRINCE Strachan and his John Carroll Catholic Golden Rams continue their run in the Florida High School Athletic Association playoffs and are headed to the regional final - second consecutive upset - with a win.

GARVIN Clarke posted a career-high scoring night in NCAA Division I and a pair of Bahamians posted double doubles in Division II basketball.

LAHIEM Bell is headed to NCAA Division I baseball.

The Bahamas senior men’s national basketball team is set to return to action in less than two weeks when they face Canada in the first window of the FIBA World Cup 2023 Qualifiers.

A PAIR of Bahamian football players have garnered collegiate offers following successful seasons at one of the newest rising prep programmes in South Florida.

LATHANIEL Bastian had an impressive debut in his transition to NCAA Division II basketball to highlight the weekend from Bahamians at the top tier of the sport.

JONQUEL Jones delivered another dominant performance for Bosnia and Herzegovina in the FIBA Women’s EuroBasket 2023 Qualifiers.