Man accused of stealing $8,000 worth of goods

A MAN was charged in the Magistrate’s Court yesterday with stealing goods worth more than $8,000 from another man's home.

WHILE the weather did not cooperate over the weekend at the Roscoe Davies Soccer Complex, this did not dampen the spirit of the competitors in the men and women divisions of the Hummel Cup Soccer Tournament.

Officials at the event for Wednesday's announcement.

A MAN was found guilty by a magistrate yesterday of stealing $1,800 worth of car parts from a woman's car and also causing $200 damage to the same vehicle.

Marileidy Paulino of Dominican Republic celebrates after winning the women's 400m race at the Qatar ... 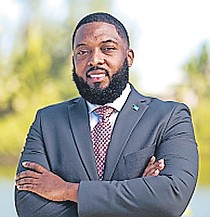 TEVIN BANNISTER, Series 7 license holder and consultant in the Office of the Prime Minister, ...

Bahamians are now cautiously optimistic that the worst of the COVID-19 pandemic is finally behind us, with declining infections and hospitalisations.

ART OF GRAPHIX: Are you a good boss?

It's often said that people quit bosses, not jobs. A bad boss can make a good job miserable and a bad job unbearable. Beyond the negative impact on individual employees, ineffective managers can also cost companies tons of money in turnover and lost productivity.

POLICE are currently investigating two homicides that occurred over the weekend after one man was shot to death and another man died after his sister reportedly stabbed him.

Every time I drive through downtown Nassau it depresses me.

REGIONAL leaders are expected to discuss COVID-19’s impact, the effects of climate change as well as disaster preparedness at the ninth Summit of the Americas scheduled to be held in Los Angeles this summer.

A MAN was granted bail in a Magistrate’s Court yesterday following an arraignment related to allegations of possessing a weapon and ammunition.