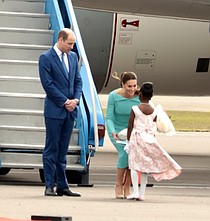 A MAN was placed on a year's probation on Thursday on a drug charge.

MADRID (AP) — John McAfee, the creator of the McAfee antivirus software who last year claimed he had bribed a Bahamian officer, has been found dead in his cell in a jail near Barcelona, a government official told The Associated Press on Wednesday.

Senate President LaShell Adderley gave a heartwarming tribute to the late Carissa Culmer, who is alleged to have taken her own life on March 10.

A MAN died in hospital after he was shot outside his home in Flamingo Gardens on Thursday night.

I WAS going in a totally different direction with the column this week, until the “bull s@@t” hit the fan in the HOA!

THE Ministry of Health and Wellness’ social mobilisation unit will set out for a third weekend on a walkabout in key communities to offer on-the-spot vaccinations and educational resources to its residents.

MONDAY UPDATE: Haiti's Civil Protection Agency said 1,297 dead from the magnitude 7.2 earthquake had been counted by Sunday, a day after the temblor turned thousands of structures into rubble and set off frantic rescue efforts ahead of a potential deluge from an approaching storm.

Rawson Square lights up for Christmas

TRANSPORT and Housing Minister JoBeth Coleby-Davis said yesterday her ministry will review the former government’s Prospect Ridge development project before it makes any decision relating to the housing programme.

Shenseea should be banned

A US-based online news site recently reported that The Bahamas leads the world in rape cases per capita. According to the site, the rate is pegged at 133 per 100,000 people. In the Caribbean country of St Vincent and the Grenadines, the rate is 112 per 100,000; while in Jamaica it is 51 per 100,000.

ONEIL Williams lowered his own Bahamas national record in the men's marathon when he competed in the fourth edition of the Eldoret City Marathon in Kenya on Sunday.

Minnis no longer the scapegoat

The December 2019 SARS-CoV-2 outbreak in Wuhan, China has exacted an immense social, physical, economic, psychological and political toll on Bahamians.

There is no such legal creature as “marital rape” and I, as a trained lawyer, am sick and dead tired over the miss abuse application of that terminology. In law, rape is rape....the forcible sexual intimacy between a male and female, regardless of marital status. A woman's or man's body belongs to him or herself, apart from God as our Creator.

Attached is a poem written by me in April 1999, which I submit for publication in memory of our little darling Bella and the call to our national compassion and action: “Rise Bahamas, Rise!”