Dna Chief: I Couldn't Get Into Business Now 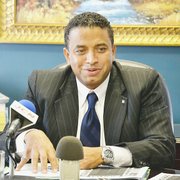 The Democratic National Alliance’s (DNA) leader yesterday said today’s economy would prevent him from entering business in the manner he did 20 years ago, describing the Budget as lacking vision and providing “no light at the end of the tunnel”.

Branville McCartney said the Government’s 2013-2014 fiscal programme offered nothing in terms of how to grow the economy, and attract new businesses and industries to the Bahamas.

And he described the various new and increased taxes as “not good for business”, especially small companies, while decrying the absence of incentives for Bahamians to become entrepreneurs.

The DNA leader added that many Bahamian firms were now being “taxed to kingdom come”, and the lack of consultation with affected industries meant many had been hit “out of the blue” - creating much ill-will.

“We have been in an economic recession for the last five years, and there seems to be no light at the end of the tunnel,” Mr McCartney told Tribune Business.

“That is very concerning, as we can’t say whether in the next year, year-and-a-half, we will see an improvement.

“When you can seen an economic pick-up coming, you can budget and prepare for that, but you can’t see the light at the end of the tunnel and there is no one with a flashlight to guide you out. That’s how the business environment is.”

Noting that his wife was in the process of expanding The Meridian School via a second educational institution in western New Providence, Mr McCartney said the duo had been in business for 23 years.

“We were saying that some young person trying to make it in this Bahamas, even to buy a home, it’s virtually impossible,” the DNA leader said.

“The banking system is difficult, the red tape you have to go through with government is discouraging, and I don’t see where the Budget is able to assist in that regard.”

Speaking from his experience as an entrepreneur, Mr McCartney told this newspaper: “I’m involved in the legal profession [Halsbury Chambers], real estate, the pharmaceutical business and education.

“It is not easy. My wife and I, collectively, we’re responsible for a hell of a lot of people in terms of their families every month, and we want to make sure the economy is stable and growing.

“If I try to do now what I did 20 years ago, I can’t do it. The banks want everything, and the red tape you have to go through with government, the public service and licensing, it’s just terrible.”

While praising the Government for extending the first-time real estate buyer tax exemption for another five years, Mr McCartney said this incentive was “not new”.

“That was coming. There was nothing new. What new initiatives do you have to move this country forward?

Warning that the Government had to be careful in imposing new or increased taxes given the weak underlying economy, Mr McCartney said it was “inevitable” that any rises would be passed on to consumers.

“I understand the Government is trying to raise money through these taxes, but we have to look at this picture as a whole,” Mr McCartney told Tribune Business. “The question would be: Is the loss of business going to be worse than the money raised from these taxes you’re going to impose?”

The DNA leader likened the situation to the former Ingraham administration’s 2010-2011 Budget, which both raised Excise tax rates and changed the basis upon which these were levied on the auto industry.

Agreeing that the sector’s tax rates were raised to the point where the ‘law of diminishing returns’ kicked in, Mr McCartney said: “The Government didn’t make any more money because people stopped purchasing those vehicles.”

The DNA leader’s voice is thus added to those who believe the Government may have overreached in the number, and amount, of new and increased taxes it has imposed.

The Bahamas is unlikely to hit its economic and net job creation targets as a result, and many observers feel the Government’s failure to consult and inform some impacted industries in advance has exacerbated the situation.

And he added: “It’s like running the country as a business. If you increase prices here, what effect will that have on clients coming in, business coming in. What effect will it have in the long run?

“Small businesses are the backbone of any economy, I can’t put it any other way. There ought to be incentives for the development of small businesses and for persons to get into business in order to try and boost the economy.”

Am I the only one who has noticed that Comrade Bran's press releases almost always seems to coincide with media coverage when there's something go'in on or being said by the red shirts? This time it's deputy leader Loretta's "confusion" statement with her leader Minnis. Who's advising her leadership bid, by slapping the living hell out of a felllow MP and attacking your "current" leader." While we all know Bran is watching. from his safe Village Road corner. This green shirt leader (is there still a green party around) will play it safe ... waiting for the autopsy report to surface, before he makes his "public" move for the leadership. I do know that Bran has met with Hubert.

In theory he makes valid points but the issue is what will he do if he got in, probably the same thing as everyone else.. the problem is there needs to be an ideological shift with how we see ourselves and invest in ourselve.. that is Bahamian citizens as stakeholders, owners rather than relying on new foreign owned businesses for more service jobs.. first the government needs to make tremendous efforts to improve education for all Bahamian youth.. the other thing is to stop selling our land to foreign interest and encourage Bahamians to own there own Country... People want to come to the Bahamas for its beauty and natural resources, more focus should be put on ecotourism where the entire population can benefit... The focus should be put on giving citizens back ownership and a economic plan that's sustainable for individuals and the enviroment.. A plan that gives even those in poverty an opportunity to improve there own life through smart Capitalism rather than government dependancy.. if u listen to guys like Bran all they offer is servitude for the Bahamian people while foreign interest walk away with the real $$$$$..

You are right on! I have posted this link before.

People think that the Bahamas have no resources, but we are rich if we had the capital and the know-how to exploit it. The French government funded this woman's research into health benefits of Sea Grape and Poinciana, and now this business is raking in the bucks, while it remains unexploited by Bahamians. The government of the Bahamas has to stop lining their own pockets and do something for the Bahamas.

Too many baby factories in the Bahamas for us to be successful at anything else. Nobody cares where their kids are gonna work when they grow up - they just want kids. No questions asked.

The Bahamas has failed years ago,for every dollar we make,at least 70 cents out of that dollar leaves the country,for food imports,bills,etc.this country will never see economic prosperity if we cant even feed ourselves,some of these islands are ideal for agriculture,but we dont grasp that opportunity,we are a in a tropical climate so most vegetables and fruit can be grown right here,i dont see why we import what can be grown right here,one of the main excuses i hear,the supply cant meet the demand,well that may be true in some cases,but if the government themselves show more interest in the agricultural industry,i think it will move forward,livestock,fisheries,those three alone if managed properly can help this nation a long way.