‘We are our brother’s keeper’ 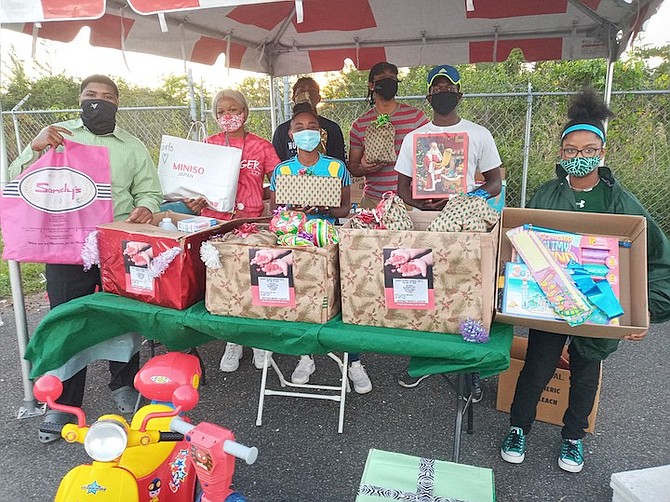 SYDNEY CLARKE, flanked by her friends, display some of the items that she collected for distribution to the Bahamas Children’s Emergency Hostel.

With the support of the Bahamas Lawn Tennis Association, her family and friends, young tennis sen-sation Sydney Clarke was able to surpass her goal of items received on behalf of the Bahamas Children’s Emergency Hostel.

The Ministry of Sports’ 2020 Athlete of the Year held a food and toys drive yesterday at the National Tennis Centre. She’s expected to make the pres-entation to the home for underprivileged children on Thursday.

“The event was a big suc-cess. I got a lot of donations. A lot of people stopped back and gave what they had, so I am really glad to be able to make a differ-ence and to help to restock the pantry, also provide them with clothes and toi-letries and toys,” she said.

It’s a gesture that Clarke felt is needed in a time when everyone is being affected by the coronavirus pandemic. “I knew people would support me, so I’m very happy and glad that I can show everyone that in this time, we can still make a difference and support each other, even if it’s our last. We are our brother’s keeper, so anything I can do, I will help out.”

Home for Christmas after completing the first semes-ter of her freshman year at the University of Alabama at Birmingham, Clarke said she wanted to concentrate on getting as much food items and she was able to achieve that goal.

The 18-year-old thanked her family and friends, who all pitched in and helped her with the food drive, for the support she received and she said she’s even more excited about taking the items to the home on Thursday.

The former CR Walker Secondary High student, who went on to attend Windsor High School where she earned a full scholarship and became a part of the Albany Tennis Academy, before she grad-uated this year, noted that she decided to make it an annual event.

Her cousin, Marinda Tucker, who is currently off to school as well on a golf scholarship, said it’s a great way to give back to the community and that was why she supported her.

“Twenty-twenty hasn’t been a good year for a lot of people, so the fact that she chose to do something like this shows her character. That is why I am supporting her,” Tucker said. “She’s a great person.”

“I think what she’s doing is very good, considering the type of year that every-one has had,” Armbrister said. “But I think because of Christmas, this is a good time for her to give to the children to let them know that there are some people who care about them.”

Armbrister, who is planning to head off to Hampton University next year, said more athletes should be able to give back to the community so it was those people who sup-ported them to get to where they are today.

Bahamian versatile celebrity Ebony Bahamas said she only recently met Clarke at a Brajaxba Tennis Club event at the Winton Tennis Centre and after being introduced by coach Bradley Bain, she felt she was the perfect person to help mentor her 11-year-old daughter, Aryauna-Skye, in tennis.

“I really just clicked to her because she has such a wonderful spirit. We con-nected and exchanged numbers and we joined on our Facebook and Insta- gram pages,” she said.

“So when she reached out to me about having this charity event and if I can come out, it would be great. So my daughter and I are here.”

Ebony Bahamas said she shared Clarke’s event on her pages and she got some stuff from some of her friends who couldn’t make it to the NTC.

“We’re happy to lend our support,” she stated. “She’s such a wonderful person.”

BLTA president Perry Newton, who also dou-bles as the chairman of the National Tennis Centre, was on hand to make a donation to Clarke as she assisted those in need.

“We just want to support Sydney in her efforts,” he said. “We also allowed her to use the facilities and we also secured the tent for her to use. We know that Sydney is a stellar ath-lete with a great sense of humour. When she told me about her idea, we got together and made a contribution, It’s been a hard year for us, but we dug deep and were able to assist her course.”

Her father, Bernard Clarke, said when she came up with the idea and pre-sented it to them, the family rallied behind her. “It was a great response. She got a lot of help from the community and we are really thankful for what they did, especially coming through during these hard times,” he said.

“I’m very proud of her because she’s my mentor and she’s kind of an inspi-ration to me, so she’s showing me how to develop my character,” said the young tennis player, follow-ing in her sister’s footsteps.

“By her doing this, she’s inspiring me to help others. She’s also paving the way for young girls in the Bahamas.

“She’s done so many things. She’s done a lot for our country and she makes us all proud.”