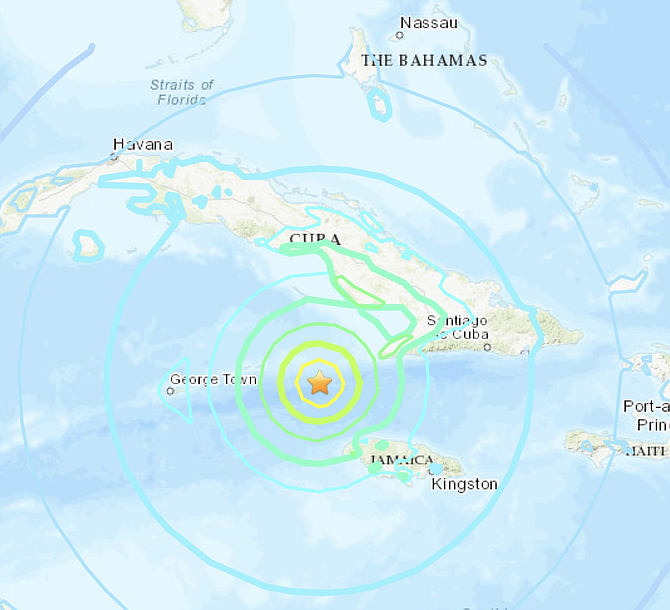 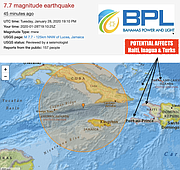 UPDATE: NEMA has released the following statement on the earthquake that struck south of Cuba and northwest of Jamaica on Tuesday afternoon:

UPDATE ON EARTHQUAKE: NASSAU, The Bahamas - The Pacific Tsunami Warning Centre (PTWC) advised that a powerful 7.7 magnitude earthquake occurred 83 miles northwest of Montego Bay, Jamaica at approximately 2:10pm on, Tuesday, January 28, 2020, at the depth of 6 miles which was felt in New Providence around 2:15pm.

The PTWC has given a possible Tsunami threat for Belize, Cuba, Honduras, Mexico, the Cay Islands and Jamaica.

“No Tsunami threat has been forecast for anywhere in The Bahamas,” the National Emergency Management Agency has confirmed. “And there are no reports of injuries or damage.”

Meanwhile, the Pacific Disaster Centre out of Hawaii is actively monitoring the region for potential impacts to population. According to United States Geological Survey (USGS) models, light to moderate shaking was experienced in Jamaica. The model indicates a low likelihood of casualties and damage from shaking. Residents should follow local emergency management authorities for more information pertaining to their communities.

Reports reaching NEMA are that buildings have been evacuated due to tremors being felt from the earthquake in areas around New Providence area. NEMA and the lead agency the Bahamas Department of Meteorology will be carefully monitoring any further earthquake advisories and tsunami threat messages from the PTWC and will advise the public accordingly.

Furthermore, the Hon Iram Lewis, the Minister State for the Ministry of Disaster Preparedness, Management and Reconstruction has contacted Executive Director of the Caribbean Disaster Emergency Management Agency (CDEMA), Ronald Jackson who confirmed that CDEMA is closely monitoring the situation and will report any changes. The Minister also contacted officials on Inagua in the Southern Bahamas, and they confirmed no impact at this time.

HAVANA (AP) — A powerful magnitude 7.7 earthquake struck in the Caribbean Sea between Jamaica and eastern Cuba on Tuesday, shaking a vast area from Mexico to Florida and beyond, but there were no reports of casualties or heavy damage.

The quake was centered 139 kilometers (86 miles) northwest of Montego Bay, Jamaica, and 140 kilometres (87 miles) west-southwest of Niquero, Cuba, according to the U.S. Geological Survey. It hit at 2:10 p.m. (1910 GMT) and the epicenter was a relatively shallow 10 kilometres (6 miles) beneath the surface.

Dr. Enrique Arango Arias, head of Cuba's National Seismological Service, told state media that there had been no serious damage or injuries reported.

Gov. Carlos Joaquín González of Mexico's Quintana Roo, which is home to Cancun, Tulum and other popular beach resorts, said the earthquake was felt in multiple parts of the low-lying Caribbean state but there were no early reports of damage or injuries.

The Pacific Tsunami Warning Center initially warned that the quake could generate waves 1 to 3 feet above normal in Cuba, Jamaica, the Cayman Islands, Honduras, Mexico and Belize, but issued a later message saying the danger had passed.

The initial tremor was followed by a series of strong aftershocks, including one measured at magnitude 6.1.

The quake was felt strongly in Santiago, the largest city in eastern Cuba, said Belkis Guerrero, who works in a Roman Catholic cultural center in the center of Santiago

"We were all sitting and we felt the chairs move," she said. "We heard the noise of everything moving around."

She said there was no apparent damage in the heart of the colonial city.

"It felt very strong but it doesn't look like anything happened,'' she told The Associated Press.

It was also felt a little farther east at the U.S. Navy base at Guantanamo Bay, Cuba, on the southeastern coast of the island. There were no immediate reports of injuries or damages, said J. Overton, a spokesman for the installation, which has a total population of about 6,000 people.

Several South Florida buildings were evacuated as a precaution, according to city of Miami and Miami-Dade County officials. No injuries or road closures were reported. No shaking was felt at the Hard Rock stadium in Miami Gardens, which will host the Super Bowl on Sunday.

The quake also hit the Cayman Islands, leaving cracked roads and what appeared to be sewage spilling from cracked mains. There were no immediate reports of deaths, injuries or more severe damage, said Kevin Morales, editor-in-chief of the Cayman Compass newspaper.

The islands experience so few earthquakes that newsroom staff were puzzled when it hit, he said.

"It was just like a big dump truck was rolling past," Morales said. "Then it continued and got more intense."

Dr. Stenette Davis, a psychiatrist at a Cayman Islands hospital, said she saw manhole covers blown off by the force of the quake, and sewage exploding into the street, but no more serious damage.

Claude Diedrick, 71, who owns a fencing business in Montego Bay, said he was sitting in his vehicle reading when the earth began to sway.

"It felt to me like I was on a bridge and like there were two or three heavy trucks and the bridge was rocking but there were no trucks," he said.

He said he had seen no damage around his home in northern Jamaica.

Mexico's National Seismological Service reported that the quake was felt in five states including as far away as Veracruz, on the country's Gulf Coast.

It's a strong geological probability not rule out reaching conclusion that in some cases likes vibrating floor under foots colony's comrade crown ministers, to not have have been but token early warning sign - that the removeth the Imperials is fast approaching - that the overturneth their governing mandate - won't reach into 2020? Can't just be writing this, just, cant.

" quake also hit the Cayman Islands, leaving cracked roads and what appeared to be sewage spilling from cracked mains"

Is it possible a tremor caused the prince Charles water main break? They should have a geological institute check for abnormalities around 1am Sunday... maybe... maybe not..

I refuse to listen to anything NEMA has to say. It is far better to get information from reliable sources online!