‘Nacac Don’T Support Racism In Any Way, Shape Or Form’ 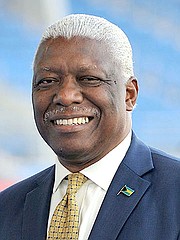 WHILE Mike Sands indicated that that there is no room for systemic racism that has resurfaced in the United States, there is an opportunity to help unite the athletes in the region through a track and field meet staged here in the Bahamas.

Speaking over the weekend as the newly elected president of the North American, Central American and Caribbean region, Sands said NACAC finds it absolutely necessary to add its voice to the chorus that continues to grow, declaring its total rejection of any form of racism in society, generally, but more so in the world of sports.

“I just want people to understand that NACAC don’t support racism in any way, shape or form,” said Sands, a former president of the Bahamas Association of Athletic Associations. “If you look at what is happening, sporting bodies are talking about it and NACAC, which represents a cross section of ethnicity and race, creed, religion and colour, we want to raise our concern that we do not support racism. We just don’t want to remain silent on the issue. We just want to make the statement that we do not support racism in any shape or form.”

The USA went into a “Black Lives Matter’ frenzy following the brutal death of African American George Floyd by a white Policeman in Minnesota. That led to a nation-wide protest, riots and looting in leading up to his funeral service last week as people banded together for justice.

“I think what has been happening through North America, the world and even in the Bahamas, has sensitize people that we need to be more aware that all people are created equal,” Sands said. “We have to make it a point to treat everybody equal, regardless of race, creed or color. That is the underlying message. People want to be treated equal, especially those that are considered minority.”

As NACAC and its parent body, World Athletics, continue to lead the world in the fight against drugs, Sands said they too strive to play a leading role in the eradication of racism in sport, fully cognizant that by doing so, they are participating in a greater war, that of eradicating the scourge of racism from global society.

With the world coming to grips with the spread of the coronavirus pandemic, which has halted activities since March, Sands said NACAC is doing a lot of work behind the scene to put on a meet that will bring the region together later this year.

“We do have a plan and we are looking at something before the end of the season later on in September to be centered around the remaining Diamond League and the Prefontaine Classic, which is scheduled for October 4.

“We’ve been doing a survey with our area coaches and our area athletes’ representatives and there is a huge support for an event for the athletes to n because a lot of them have been training and they are anxious to see how they stack up before they go into their Olympic preparatory phrase.”

While the 2020 Olympic Games were one of the major casualties on the sporting calendar this year, the International Olympic Committee has agreed to postpone the games in Tokyo, Japan from July 24 to August 9, 2020 to July 23 to August 8, 2021 because of the coronavirus pandemic.

“I think the coaches, the athletes and their agents are very anxious to get in a meet to measure their performances so that they can start planning for the big year next year. So we are excited about the prospect of putting on the meet. We are just keeping our fingers crossed. We know the time frame that the coaches will meet to get their athletes ready to compete in the meet.”

With a proposed date on the agenda, Sands said they are looking at the possibility of hosting the meet here in the Bahamas at the Thomas A. Robinson National Stadium. If that doesn’t work out, he said they have an alternate plan to go to Grenada or even

“We have to see what kind of support we can get from either one, but what we in the Bahamas is truly missing is our opportunity for a number of reasons,” he stated.

“We have the best geographic location and people are expressing their interest to come here and there are a number of airlines who operate in South America and in the Caribbean airline that also comes into the Bahamas at least twice a week and there are airlines in the United States and Canada, who fly here, so we have everybody covered very easily.”

As the president of NACAC with its headquarters now located here at the TAR National Stadium, Sands its his only wish that the Bahamas can cater to the NACAC meet later this year.

“We need the support of every body here because the Bahamas has always been an attractive venue to host an international track meet, so we hope that we can put this meet on here,” Sands summed up.