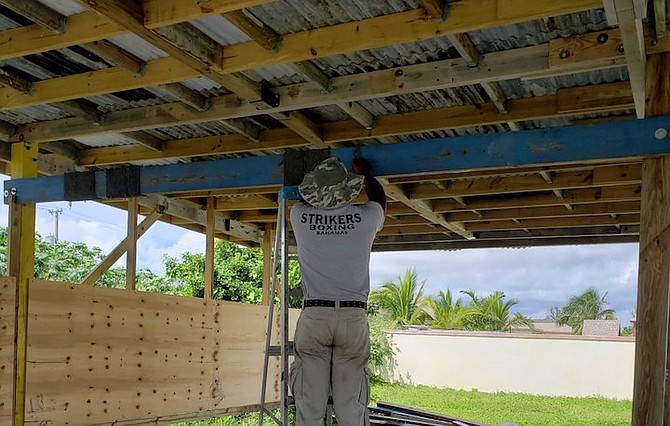 RONN Rodgers putting the finishing touches to his new gym. 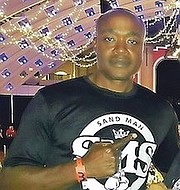 WITH his relocation to Tampa, Florida, thwarted because of the coronavirus pandemic, Strikers Boxing Club’s coach Ronn Rodgers has decided to set up a new local boxing gym.

Aptly named the Strikers Covid Edition, the new gym is outdoors in Marshall Road South. He’s expected to have it completed by next week with all the painting and equipment placed in it.

But Rodgers said he’s waiting on the approval from Prime Minister Hubert Minnis on the reopening of beaches, parks and recreational areas before he officially opens its doors.

Rodgers, who was last located at the former Champion Boxing Club, owned by Ray Minus Jr, on Wulff Road, said after watching the number of cases soar in Florida, he opted not to take up the offer to coach the club in Tampa.

“When I was over there recently negotiating for a fight, one of the fighters came down with Covid-19,” Rodgers pointed out. “They ended up canceling the entire event, so I told myself that this doesn’t make any sense, so we decided to stay.

“The job offer is still on the table. They called me last week. They still want me to come over. In fact. They want me to come over next month, but I don’t think I will make that move. I will entertain them, but I think I’m going to stay here for now.”

With Minus Jr’s gym closed and being relocated to his home further down on Wulff Road east, and the National Boxing Gym at the Baillou Hills Sporting Complex as the only venue open, Rodgers said there’s a need for him to get his gym underway, even though it’s outside of the average grass root boxer.

“There’s a need for boxing gyms to open up in the country right now,” Rodgers stated. “The Bahamas Boxing Commission called me the other day concerned about it, so I decided to stay.”

Compared to his previous locations, including the Carmichael Road Shopping Center where Rodgers attracted a number of boxers as well as fitness enthusiasts, he noted that this new location will provide all of the amenities needed to enhance a proper training programme for the boxers.

“It’s going to be outdoors with a cover, but we have ample running space in the yard,” he pointed out. “In the city, there was no room to run, but here, we have all the space that they need to run and train.

“I know it’s going to affect some of the boxers that I worked with in the past, but I realize that there’s always an opportunity for boxers because since I’ve started building this one, I’ve had a number of kids coming around asking if they can join.”

With the new gym located in close proximity to the Anatol Rodgers Secondary High School, Rodgers said he intended to tap into the idle young men to get them involved in the Strikers Covid Edition.

“I was advertising it to some of my members and I told them since this is going to be here for a while, I wanted to name it after the coronavirus pandemic. I thought it was a catchy name. Hopefully it will catch on and grow with the boxers who come out and participate.”