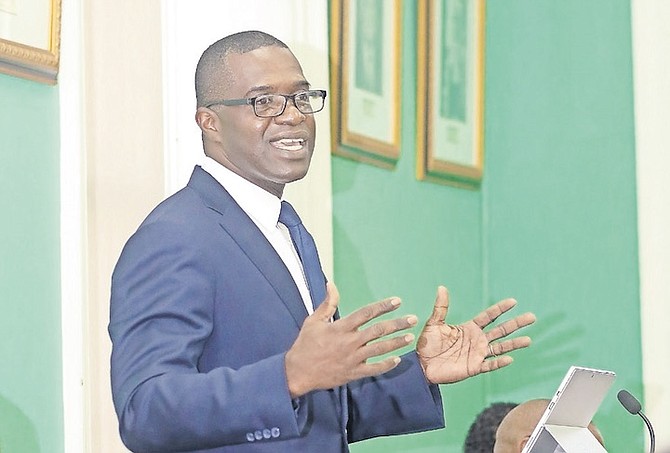 The government is eyeing a $1m minimum for investors to qualify for economic permanent residency by making non-real estate investments in The Bahamas, a Cabinet minister revealed last night.

Elsworth Johnson, minister of financial services, trade and industry and immigration, told Tribune Business that the Immigration (Amendment) Bill 2021 that was tabled alongside the budget is designed to “improve The Bahamas’ competitive edge” by expanding the routes through which high net worth individuals and their families can qualify for permanent residency.

Explaining that the reforms are designed to “unlock” the potential that economic permanent residency has for attracting wealthy investors and foreign exchange earnings to these shores, he added that such persons will have more options through which to qualify other than the present, narrow route of acquiring Bahamian real estate valued at $750,000 or more.

The Bill’s reforms will permit investors to qualify via two other routes, one of which involves making investments “in The Bahamas of such a kind and of such an amount as may be so prescribed”, while the other involves a mix of such investment and real estate purchases.

“We’re looking at at least $1m,” Mr Johnson told this newspaper, when asked what the minimum investment will be for persons to qualify for permanent residency without acquiring real estate. He previously said in his contribution to the 2021-2022 budget debate that such “investments” would be in endowment funds targeted at education, sports, the arts and culture, and social development projects.

The minister last night said the government has yet to determine whether investments in government securities, such as bonds, or the proposed National Infrastructure Fund and sovereign wealth fund, would enable investors to qualify for economic permanent residency.

The reforms, Mr Johnson explained, were being driven by feedback from the Bahamian financial services industry and its clients, who were arguing the case for a more flexible regime to qualify for economic permanent residency, as well as the results of a “benchmarking exercise” conducted against competitor international financial centres (IFCs).

This had revealed that other jurisdictions offered permanent residency products linked to non-real estate investments, and Mr Johnson acknowledged that investors were not always inclined to acquire Bahamian real estate worth more than $750,000 - especially as a small condominium could suffice for digital economy era post-COVID-19.

“The amendments will change key sections of the Immigration Act to unlock the potential of economic permanent residence as a vehicle for investment,” Mr Johnson said of the Bill during his Budget debate contribution. “Currently, applicants who purchase a residence in The Bahamas valued at $750,000.00 or more are eligible to apply for a certificate of economic permanent residence....

“The proposed provisions of the Bill seek to expand the eligibility requirements for the acquisition of economic permanent residence by providing for the eligibility of investments of any kind at an amount to be determined. This can include investments in various endowment funds that would be earmarked for special interests such as education, sports, arts and culture, social development projects, and other relevant areas.

“Eligibility can also be based on a combination of the purchase of a home and other investments. We are essentially introducing a broader, more flexible approach to economic permanent residence that takes into account all kinds of investments - not simply limiting it to the purchase of a residence.”

“There may be individuals who do not want to own a home, and all the attendant responsibilities of owning a home. It was very difficult to address their concerns where persons were not interested in buying a home. We have a lot of persons coming now, and this is a response to what we’ve been hearing from industry, and trying to diversify and improve our competitive edge.”

The minister added that an investor acquiring a $350,000 condo may bring with him some $5m-$10m in capital available for investment, and it is this market niche that the reforms are targeting. He added that “hundreds of people” had come to The Bahamas due to COVID-19, and that there had been “a serious uptick in permanent residency applications” although he was unable to quantify the amount.

Mr Johnson, during his Budget debate presentation, also said: “We are also making changes to the amount of time that must be spent in The Bahamas to be eligible for economic permanent residence. Currently, there is no mandatory period.

“The proposed Bill imposes a minimum 90-day period for which the economic permanent residence holders must be resident in The Bahamas, ensuring that the people who are receiving this privilege are people who are residing here and have a vested interest in being here.

And he added: “These measures ensure that people in receipt of economic permanent residency continue to maintain their investment in The Bahamas. we are seeking to create sustained investment in the interest of national development.....

“This is done in the name of efficiency, in keeping with the Government’s plans to improve the speed of all services, especially those related to investors. To that end, we are currently prioritising the approval of any applications that are beneficial to the country as we clear out the current backlog of cases that have languished for years.

“These include significant foreign direct investment initiatives and other forms of investments that will generate employment for Bahamians and aid in the diversification of the local economy.”

Make it law , now! They must pay more to come here.

But is it $1M and hassle, delay, stall, dither as usual, or $1M and expedite? If you are trying to attract high net worth individuals you cannot treat them as you would Bahamians needing Drivers Licenses, passports, and any and all sundry other necessary permits and approvals needed. But that does bring into question the obvious problem with any and all systems of approval, permits, documents etc.

Right. Nygard would love this law. And he's exactly what were looking for. Rich men.

@Thisisours, go to the head of the class on your last para. Indeed the wealthy can turn out to be generous doners, to suitable causes and having pamper parties. Indeed which alternating govt of politicians would make the better decisions.

Even though land is our country's most scarce resource, especially on New Providence and Paradise Island, Minnis and his cohorts are quite willing to sell it to foreigners for chump change. One million dollars today is a very small peanut for most of the world's wealthy.

And let's not forget that neither Bahamian labourers nor Haitian labourers are the preferred labourers in the homes and yards of wealthy foreigners. They much prefer Filipinos, Peruvians, and so on.

Minnis has yet to explain how Royal Caribbean was able to secretly acquire over a relatively short period of time (a few years) more than 13 acres of preciously scarce property on the western end of Paradise Island.

it is BS.... nobody will invest even $100k into a country with devastated infrastructure, potholes in the roads, dirty salty water, slow internet and permanent power outs... they are out of their minds.

Other jurisdictions actually facilitate obtaining the residence there, take e.g. Dubai. No minimum investment, you only need to register a company and it comes with full work permit etc and after some years you are even eligible to get the passport, for as little as $5000 license fees, which reduce to $3500 in second year.

What water quality events have occurred where WSC has supplied dirty salty water? I would strongly disagree unless you are speaking anecdotally.

Why am I not surprised that our government is clueless once again. Instead of raising the minimum, mandate a minimum ‘in country’ period every year. If you want residency then you have to spend at least 4, 5 or 6 months a year in the country. Raising the minimum investment to $1 million does nothing except give more commissions to real estate companies and add a bit to property tax revenue. Having people spend time in our country means they eat, shop, restaurants, use water & electricity, etc, etc, etc. That’s where the money is.

Let's be creative and sell them titles as well. Maybe you want to be Sir David of Nassau - $100MM. Diplomatic stuff too. How much to be on the Bahamian Olympic committee? I can attend the games like a VIP!!~ Gotta be $30MM+++ FIFA Rep...sorry sore spot there.. You get the point.