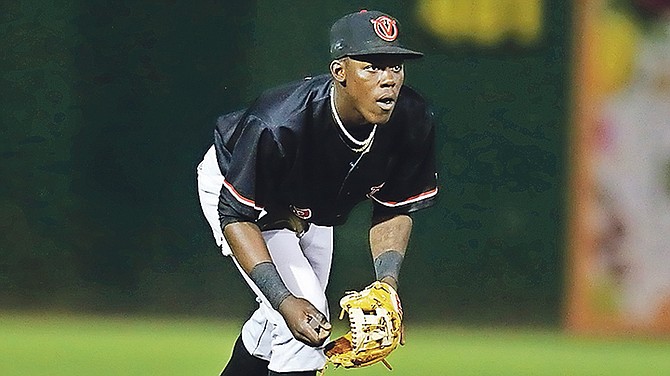 Chisholm makes his debut in camp for Marlins

AS the Major League Baseball season nears the start to its 2020 season, Jazz Chisholm made his debut in camp for the Miami Marlins.

JAZZ Chisholm will make his 2020 debut in Triple-A Baseball.The 22-year-old shortstop was assigned to the Wichita Wind Surge of the Pacific Coast League and the AAA affiliate of the Miami Marlins.The Marlins trimmed its spring training roster to 26 p

Jazz Chisholm continues to show flashes of brilliance that have the Miami Marlins front office and fanbase optimistic about his future with the organisation.Chisholm hit his first home run of spring training on Sunday afternoon in a 7-3 loss to the S

A PAIR of top Bahamian prospects eligible for Major League Baseball’s Rule 5 Draft were named to the 40-man rosters of their respective clubs retaining their rights and protecting them from the draft. The Miami Marlins added and protected Jazz Chish

JAZZ Chisholm’s advancement to Double-A baseball has produced an All-Star nod for the highly touted prospect in the Miami Marlins organisation. The Jacksonville Jumbo Shrimp shortstop was named a member of the Southern League Postseason All-Star tea

Double A: Chisholm and Fox connect on home runs

JAZZ Chisholm and Lucius Fox each homered in a productive weekend at the plate for the pair of 21-year-old shortstops in the Double A - Southern League.

BOTH Jazz Chisholm and Lucius Fox have seen early action in Major League Baseball Spring Training as non-roster invitees with their respective clubs.

JAZZ Chisholm and Kristian Robinson find themselves in an unique position in the Major League pre-season with the Arizona Diamondbacks professional baseball organisation.