Nomination Day: As It Happened 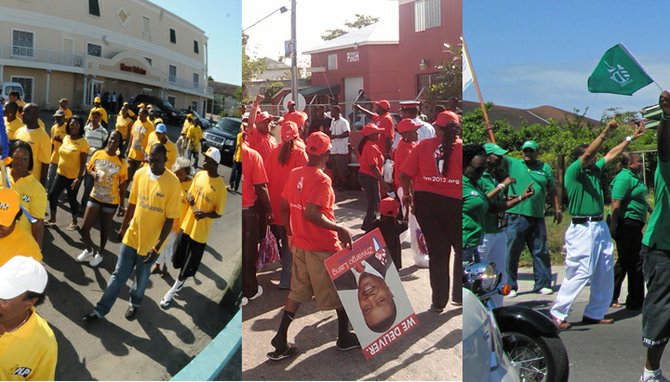 FLAGS, prayers and motorcades – it can only be nomination day. With the election now less than three weeks away, nominations had to be handed in between 9am and noon yesterday.

Here are some highlights in a timeline of the crucial three hours:

9.30am: NORTH ABACO: Prime Minister Hubert Ingraham and his wife arrived at the Cooper's Town post office flanked by police officers and a crowd of supporters. Moments before, an argument erupted between FNM and PLP supporters over decorations draping the post office – which included large pictures of the Prime Minister. They were later taken down.

9.40: Ten minutes later and FNM supporters were shouting in support of Mr Ingraham and prayers were being offered for him as he finished signing his papers in North Abaco.

Prayers being offered for Prime Minister Ingraham following his nomination

10.05: FORT CHARLOTTE: Zhivargo Laing said he was “returning back home” to Fort Charlotte where he was first elected. He said he was now “more mature” than when he first ran for Parliament.

BAMBOO TOWN: DNA supporters rallied with their leader Branville McCartney in Golden Gates shopping centre before they marched to Carlton E Francis school where he was nominated.

10.18: TALL PINES: PLP candidate Leslie Miller headed to Garvin Tynes to be nominated with some 200 supporters in tow. The PLP candidate said he was excited to get to nomination day and vowed to get right back into campaigning following his nomination.

10.21: CENTREVILLE: PLP leader and Centreville candidate Perry Christie arrived at Centreville Primary School where he signed his nomination papers. His wife Bernadette and his daughter were with him.

10.27: FORT CHARLOTTE: The DNA's Mark Humes arrived to place his nomination for the seat.

10.31: CENTREVILLE: PLP leader Perry Christie said the DNA's candidate Celi Moss was a “non-factor” in the Centreville race. Mr Christie said “maybe in another time and another place” Mr Moss would matter, but now he was simply “making noise to get attention.”

DNA leader Branville McCartney hands over his $400 deposit as he is nominated in Bamboo Town.

10.35: NORTH ABACO: A large PLP motorcade arrived for the nomination of Renardo Curry.

SAN SALVADOR: PLP Deputy leader Philip 'Brave' Davis finished the nomination process at the government offices and said he had “great confidence” he would be returned to the House of Assembly.

11.01: NORTH ABACO: The media team that flew to cover the Prime Minister's nomination in North Abaco got stranded on the Queen's Highway after their bus just broke down. Ten minutes later they were on the road again – with a noon flight to catch.

11.11: BAMBOO TOWN: DNA leader Branville McCartney is in the race – completing his nomination process by telling people: “I am going to win and we are going to be the next government.”

PLP leader Perry Christie and his wife Bernadette at the Centerville constituency for Nomination Day.

11.30: ELISABETH’S Ryan Pinder waves to supporters when he arrives at the constituency office for nomination day.

11.57: SEA BREEZE: FNM candidate Carl Bethel was in good spirits when he spoke with The Tribune shortly after he presented his nomination documents to election officials, claiming that his campaign was “well ahead” of his competitors.

CENTREVILLE: DNA candidate Celi Moss claims that he has the best plan to assist the people of Centreville and challenged his competitors not to “run away” from a debate with him. He said that his PLP counterpart had “no vision” for the people of the Bahamas.

MONTAGU: Ben Albury said now that he was officially nominated as the DNA's candidate for Montagu he was ready to “bridge the divide” that previous governments had created in the constituency.

TALL PINES: DNA candidate Dario Terrelli said as a resident of Tall Pines he knew for a fact that the people of the area were “strongly seeking change” as both the PLP and the FNM had failed the people in their representation.

NORTH ABACO: Prime Minister Hubert Ingraham laughed off the suggestion made by PLP leader Perry Christie at their Golden Gates rally last night, where he said that Mr Ingraham may lose his seat. Mr Ingraham said today: "Me? Lose my seat? That's a joke."

do these people have jobs?????

Ummmmmmm, does it matter to anyone how the PM can find the millions to invest in his constituency, undoubtedly assuring his re-election, but lousy MP's like Alvin Smith for instance, did absolutely nothing for Eleuthera?

@vinceP And he found that money to fix up Abaco when things were "bad". How come Perry couldn't find any money to fix up Farm Road when he was in power, when the economy was so "good"? The PLP is a joke.

Saw Mr. Christie on the news bring Centerville primary to a stand still for the students. Imagine if Mr. Ingraham did that you would hear the PLp,s saying how Ingraham don't care about education and the way he is trying to indoctrinate the children. Lol you'll know it's true.