Woman Power At The Polls 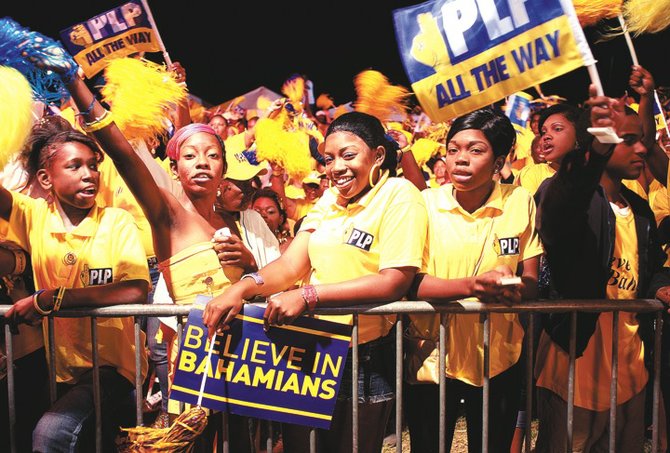 IN THE 50th year of women's suffrage, Bahamian women will hold the power at the polls.

"There are 20,000 more women registered to vote than men. Women are going to decide this election," said Prime Minister Hubert Ingraham at the 'Red Splash' Free National Movement rally on Easter weekend.

The right political pitch could make the difference, according to some observers, who claim women voters tend to have community-based concerns when it comes to politics, and are more interested in "collaboration and consensus building" in government, as opposed to the highly partisan emphasis that exists during campaign cycles.

"I found that the female voters across party lines were first and foremost concerned about how one as a candidate would impact the community.

"They were always concerned about the quality of community life and the kind of leadership one was going to offer as a partner in the development of outreach programmes to improve the quality of life of the community," said former member of parliament for Fort Charlotte, Alfred Sears, who recently retired from front-line politics.

That women are outpacing men in voter registration appears consistent with trends in education, where women outpace men at the primary, secondary and tertiary levels.

Minister of the Environment Earl Deveaux, former member of parliament for Marathon, said women are advancing in many professional categories, particularly in service industries. Although the progress has not translated into broad penetration in traditionally male-dominated industries like construction, commercial fishing, and manufacturing, he said there is a "subliminal suggestion amongst some males, particularly unskilled males, that women are taking over".

Without statistical evidence to consider, he said the emerging gender dynamics hold "potential risks for the society", and the trend is worth serious consideration by private citizens and leaders.

"What happens as people look for spouses and lifetime relationships and there is not parity of experience, education and points of view? What happens to that society if you have imbalance.

My suggestion is that if you are aware of a growing trend and it suggests from other experiences that there is a potential for conflict, then it is likely that the same result will emerge if you do not seek to address it," said Mr Deveaux.

He said women have made "remarkable achievements" in society, considering just 50 years ago they voted for the first time. That some people feel threatened by this progress is cause for contemplation, he said.

As a candidate in New Providence, Mr Deveaux said he found women articulated a greater focus on the unemployed, and opportunities for their children.

"Women were looking for opportunities for their children, most particularly their male children who they did not want to fall prey to unemployment and gangs. I encountered that repeatedly, so they wanted to hear what I had to say about what would happen to their son," said Mr Deveaux.

"I found that amongst the unemployed, women represented a significant percentage, but I also found that where I could help the women, the penetration of the efforts were far greater.

"If a women got a job you immediately saw an impact in the community; there was an improvement in children's nutrition, home repairs.

"That was a visible manifestation of the impact of helping women," said Mr Deveaux.