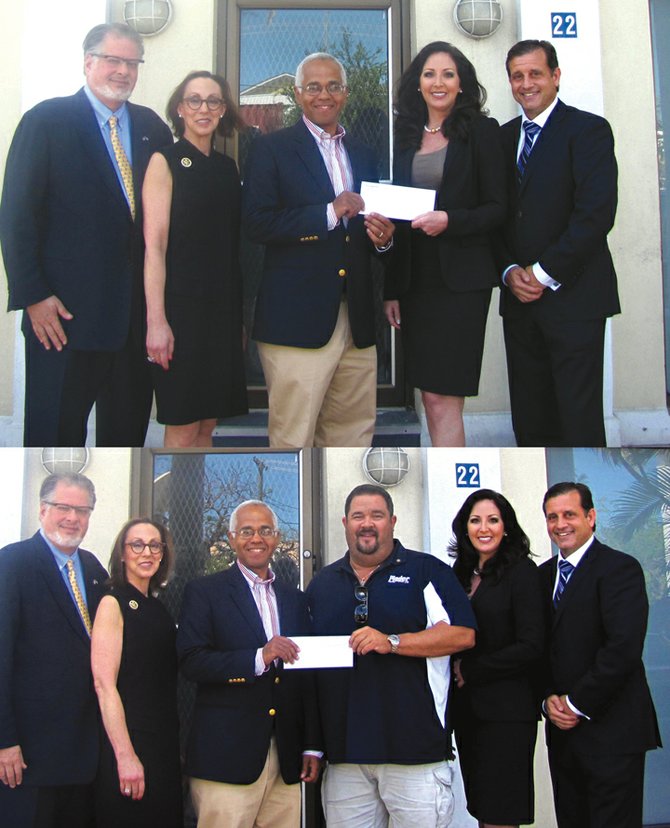 Two cheques are handed over to the Bahamas Breast Cancer Initiative. In the top picture are: Former US Ambassador to the Bahamas Ned Siegel and his wife Stephanie, Dionisio D'Aguilar, Michelle Rassin and Robert Carron at the handover. In the bottom picture a second cheque for $5,000 is presented by Adam Darville, president of the Rotary Club of East Nassau.

WE'VE done it! The Tribune with the Princess Margaret Hospital has raised over $500,000 to purchase a new, much-needed mammogram machine, at PMH.

Now the committee is on to phase two to raise funds for the genetic testing and environmental education.

According to Michele Rassin, the initial PMH Foundation Caring for Breast Campaign launched in October had raised more than $125,000. The Tribune's initiative raised an additional $230,000 and the rest of the funds were contributed by the Public Hospital's Authority to purchase the mammogram machine.

Once the funds were raised for the mammogram machine, she said, the monies were allocated to the Bahamas Breast Cancer Initiative (BBCI).

Women in the Bahamas have been shown to have the highest prevalence of a genetic mutation that places them at a higher risk for developing breast cancer.

This gene mutation - BRCA1 - which puts persons at a greater risk of breast cancer, are found in Bahamian women more than anywhere else in the world.

With the current machine at PMH being described by industry professionals as "nearly obsolete" by today's health care standards, the campaign's aim was to provide the funds for that upgrade and other initiatives.

According to cancer researcher Dr Steven Narod, the global average is five to six per cent in women, however it was discovered that 22 per cent of women with breast cancer in the Bahamas carry the BRCA1 mutation.

All contributions will be listed in The Tribune on being deposited to the Royal Bank.