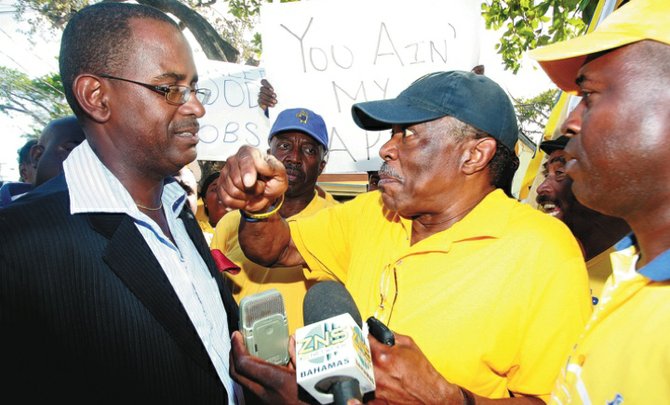 BAIN and Grants Town candidate Dr Bernard Nottage said Prime Minister Hubert Ingraham let the people of the constituency down when he failed to address them during a walkabout on Wednesday.

He said hundreds of Bain Town residents assembled at the Sarah Ingraham Park on Hospital Lane to hear Mr Ingraham's plans for over-the-hill areas - but the Prime Minister never showed up.

Dr Nottage said: "It is ironic that this same Prime Minister who cancelled Urban Renewal for the inner city and neglected the people of Bain Town and over-the-hill for 15 of the last 20 years, now suddenly has an interest in the welfare of the inner city.

"The people of Bain Town, Grants Town and other over-the-hill areas need a government that cares about them all the time, not just at election time."

He said: "The PLP is opposed to mass dislocation of our people in these historic neighbourhoods. But we ask the Prime Minister: Where would these people go after you would have displaced them under your plan?

"Many of these people have deep roots and extended familial ties to these historic communities such as Bain Town, Grants Town and Englerston. They need a government that will work with them to rebuild their communities, not displace them from their communities.

"The PLP will introduce Urban Renewal 2.0 immediately upon coming to office to continue the social and economic transformation of the over-the-hill areas."

I agree that the situation that played out the other day in Bain and Grant's Town showed how the PLP is so disconnected to the people of the Bahamas. Look at that photograph of Dr. Bernard Nottage's face and you can see the madness coming through. He seems to be performing just like his leader Mr. Perry Christie when speaking at his rallys. These men are so desperate to be returned to power that they will implode when the results are given on the evening of May 7th and they realise that the people has turned their backs on them. During all the years they represented those over-the-hill areas they did absolutely nothing for those people, there is not one positive accomplishments that Mr. Nottage or Mr. Christie could point at that they did for the long suffering people of over-the-hill areas, even after they were allocated some funds that they could do little things, they were too lazy to use the funds. Mr. Nottage in his comments about his not being able to accomplish anything because his Party was not in control of the government was such a lame excuse that I hope he is able to listen to and read afterwards. He should offer an explanation about why was he not able to accomplish anything over the last thirty-five plus years they controlled the government and particularly during the recent years 2002 - 2007 when they were the government but still did zilch on their watch. Now that our 'do something' Prime Minister has decided to take those people under his wings and do something to improve their lot, Mr. Nottage is determined to not let the people see what can be accomplished for their area and themselves in particular. Dr. Bernard Nottage, Mr. Perry Christie and Mr. Brave Davis your time has come and the people has determined that you have failed them and you should find something else to do with your time.

This is the look of desperation. Look at his eyes....lol

I SAW HE LOOKS MAD, LIKE CRAZY MAD..YEAH THAT KIND OF MAD!

I am so ashamed at the level of immaturity that persons like Dr. Nottage is displaying in this silly season. I recall that when the honourable PM announced his intention to walk in Bain & Grant's town, Dr. BJ responded in a rather threatening tone that he and large numbers of young men expelled from school would be "waiting for him". I think Dr. BJ, like Mr. PGC are quite an embarrassment to the already disgraced PLP party. Anyone else noticed how the PLP is now just repeating every plan presented by the FNM? Also, does anyone else see how the PLP is now VERY FALSELY accusing the FNM of all those evil deeds that they subjected the Bahamian people to before 1992?