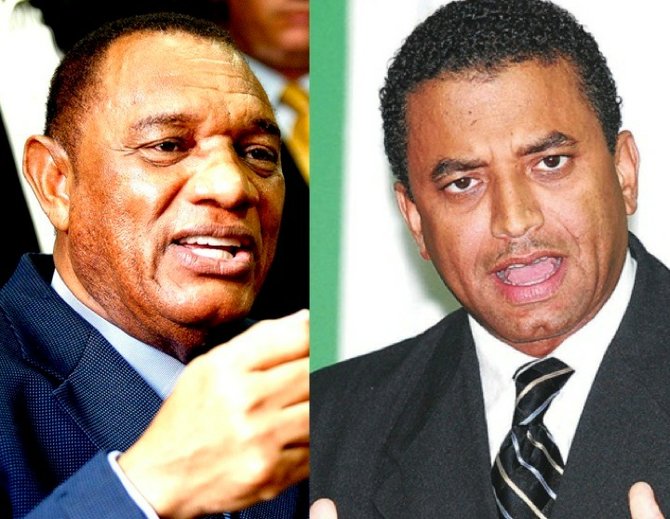 DNA leader Branville McCartney got into a heated shouting match with Perry Christie on live radio yesterday morning over claims the opposition leader colluded with Prime Minister Hubert Ingraham on boundary changes ahead of the general election.

Responding to Mr McCartney's charge that he remained silent when the allegation was raised in Parliament, Mr Christie quickly lost his temper, saying he would "have to be a jackass" to play a part in boundary cuts that disadvantaged him in his own constituency. He portrayed the DNA leader as a man under considerable pressure.

Talk show host Ortland Bodie had to raise his voice several times to be heard over the two men. He urged them to calm down as his show is "not the House of Assembly!"

Mr Christie called in to More94 FM's Real Talk Live to confront the day's guest, Mr McCartney, after he accused both major parties of "conspiring to crush the DNA".

The PLP leader denied that he ever "rode around" in a car with the Prime Minister to consider boundary changes, and said he never asked Mr Ingraham to help him govern after suffering a stroke in 2005.

He said of Mr McCartney: "I assume he was telling a joke if that's what he said, because the only interaction I had with Ingraham was when he came to my house when I was on my way to recovery, after (then Deputy Prime Minister Cynthia) "Mother" Pratt had been acting prime minister for some time, and it would really demean her in her office and the performance she gave to the country by suggesting I asked the opposition to govern."

On the question of collusion on boundaries, Mr Christie said: "I'd have to be a jackass to create a seat of the kind I have now, which would require me to go to 3,000 new voters, which I've done.

"Clearly if I had some kind of collaboration with Ingraham, I'd keep the seat that I have now, that I won by 1,000 votes."

Mr McCartney interrupted at that point, calling Mr Christie's claims "amazing" considering the PLP leader remained silent when the allegation was raised in the House of Assembly.

He said members of Mr Christie's own party "looked around in astonishment" when the claim was first made.

Mr Christie then attempted to respond, but Mr McCartney continued to make his point, causing the PLP leader to raise his voice and ask repeatedly "Can I speak?!"

When finally allowed to by Mr Bodie, who was acting as referee at this point, Mr Christie asked the DNA leader to "try to be sensible", and explained that he did reply to the allegations in the House of Assembly.

He said: "Hubert Ingraham and I were in the annual Church of God annual church service conference. He turned to me and said 'Mr Christie, what do you think about Englerston?'

"That is the only interaction Hubert Ingraham and I had, and I said to him, 'I'm not going to speak to you on this subject, because you'd only say what I said and misrepresent it'.

"You ask me 'bout why I didn't reply? That is what I said repeatedly in the House of Assembly."

He said Mr McCartney is unaware of what really occurred that day, as he was probably absent from Parliament.

"Many times you're not there when these things are happening. So you had a bit of information, you misapplied that information," he said.

Mr Christie attempted to continue, but Mr McCartney cut him off to assert that he was indeed present in Parliament that day.

Both leaders again raised their voices, along with Mr Bodie, and the next few seconds consisted of incoherent shouting, along with challenges to "get the tape" and prove who is right.

Before the show was brought to a close by Mr Bodie, Mr Christie reiterated his position, saying: "It is just a foolish assertion to make, by someone who is under pressure, and the pressure will even get greater over the next two weeks."

He then said a statement he made in private last year was misrepresented by the DNA leader.

Mr McCartney had asserted that at a family function last year, Mr Christie told him if he formed a political party, he would be "crushed" by the leaders of the two major parties.

The exchange again descended into a shouting match before Mr Christie thanked Mr Bodie and hung up, and Mr McCartney expressed his desire to call in to the show in a similar fashion when Mr Christie is a guest.

Very mature gentlemen, very mature. Both of you are displaying the exact behavior that have this country in it's current social state and behavior that we should implore our children to avoid at all cost. I hope that after this next election, we would have seen the last of all three of these self-centered, egotistical and power hungry party leaders making room for more thoughtful, informed, focused and compassionate persons to assume greater leadership roles in our country.

These are the persons who wanted a nationally televised debate and this how they conduct themselves on the Radio. Wow i am glad Mr Ingraham had the sense to not indulge in such a fiasco.

Looks like the young DNA Simba has grown up overnight to claw back these old time aging tiger and others to take his rightful place. Way to go Simba !

The problem is systemic. How do you expect them to act when the House of Assembly is pretty much a Jerry Springer show and we accept it; as a matter of fact sometimes we celebrate it. A debate IS needed among ALL candidates so there can be a structured forum that gives each the opportunity to expand on thier manifesto with MODERATED exchanges and cross examinations. If televised we would be able to see their dispositions as well. FYI, don't tell me debates are American and therefore we don't need as it would take a lot more space to state the numerous things GLADLY copy from the Americans.

I am often puzzled by those in our society who on the one hand can actually praise and even celebrate this boorish and undisciplined behaviour by our so called educated political leaders with "way to go Simba" and then on the other hand chastise and blame the government when the less educated or more implusive amongst us take this same boorish behaviour to the next level and physically hurt each other or some other innocent person. Elementally it's all the same behavior and it is short-sighted and irrational to praise one group and abhor the other. In fact, in a functional society, our adults and leaders have a duty to set the proper example in spoken and unspoker decorum and behaviour for the rest of that society. Until we as Bahamians mature beyond our fatalistic attachment and attraction to the boorish and crude political prototype and leader we as a society will have a difficult time living up to our full potential or effectively confronting our social ills like crime and other bad behaviour.