Banners Come Down - Then Go Back Up Again 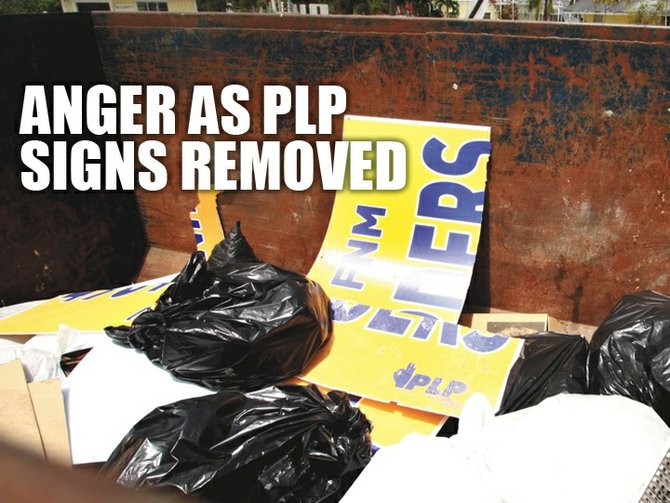 GOVERNMENT officials yesterday confirmed they were given a directive to remove specific PLP billboards from around New Providence – but would not say who gave the order or why it was given.

Several PLP banners were torn down throughout the capital Thursday afternoon and late Wednesday night, reportedly on orders from someone from the Ministry of Environment.

Then, a second mysterious order saw some of them put back in place, again without explanation.

Minister of National Security Tommy Turnquest said the Physical Planning Unit was instructed to remove the signs decrying the 490 murders on the FNM’s watch, after several “complaints from residents and tourists”.

“They were told to take down the signs with the murder count on them. We are a tourism-oriented country and tourists have been complaining to the Ministry of Tourism.

“Taxi drivers have also been complaining. The department was told to take only the murder signs down, nothing else,” he said.

“As a politician, the one thing you should never do is something that would destroy your country for the sake of power and getting into office.”

The issue exploded on Facebook yesterday afternoon, with a number of people attacking the PLP, claiming they damaged the country for selfish reasons.

Mr Turnquest would not say who gave the order for the posters to be removed but dismissed the assertion that the directive came from Prime Minister Hubert Ingraham as “complete and utter nonsense”.

Director of the Department of Physical Planning, Michael Major admitted he was told to remove the posters, but said he did not receive that order until about noon yesterday.

Therefore, he said, the signs that were torn down late Wednesday night – by people wearing FNM shirts – were not his department’s doing.

He said: “We did not remove one single poster, banner or sign Wednesday night or early Thursday morning.

“We got a directive from the Ministry of the Environment around 10am to remove the signs.

“The officers went into the field that afternoon and removed two signs, both from the Coral Harbour round-a-bout. I have no knowledge of other signs being removed. If someone moved them, I would bet my life that person does not work here. That would be illegal and my workers know that.”

Mr Major said an hour after his workers went into the field he received a second directive from the ministry to “cease” removing the posters, around 30 minutes after The Tribune began their investigation.

However, like Mr Turnquest, Mr Major remained tightlipped on who gave the order.

He also expressed his opinion of the ethics of the move, saying: “We were told around 1pm to stop removing the signs and put them back up.

“The department has no legal authority to remove those signs as they are exempted. Its our intention to return the two signs we removed. They are still intact and are in my possession,” he said.

“We know what the law says and those signs are exempt once the writ of election has been filed and that has been done. We have no jurisdiction to remove them.

“It is unfortunate that the signs were removed but we will replace them. I have proof of the signs that were removed by my workers as I asked them to video tape the process.

“The other signs in that video that is going around is not from our ministry. I want to stress that. We did not remove any signs until Thursday afternoon – anything before that was not our doing.”

Depsite Mr Major’s claims that only two signs were removed by the department and those signs were “intact”, several torn signs were found in the garbage behind the Department of Physical Planning building.

Mr Major said he spoke with representatives from the PLP yesterday afternoon, after receiving a letter from deputy leader Philip “Brave” Davis and assured the party the signs would be rehung as soon as possible.