THE DNA is calling for the resignation of PLP leader Perry Christie over his connection to the Bahamas Petroleum Company. 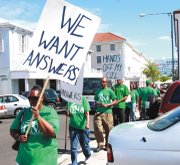 Supporters of the DNA at Thursday's protest.

DNA deputy leader Chris Mortimer, Montagu candidate Ben Albury and a group of party supporters staged a demonstration yesterday morning outside the Office of the Opposition on Parliament Street.

They were protesting recent media reports that quote Mr Christie as stating the law firm representing BPC had consulted with him at some point in the past.

The company wants to drill for oil in the Bahamas, but the DNA and others have raised environmental concerns.

Mr Albury said: "Mr Christie is the one who said he's involved, he admits to being a consultant . . .

"I would for like to ask Mr Christie to do the honourable thing and step down as leader of the opposition and resign as a candidate for Centreville."

Mr Albury added that Mr Davis should "definitely step down" as well.

Mr Christie could not be reached for comment, but Mr Davis denied there is any conflict of interest.

"How does it become a conflict? I'm not in government. When I'm there, then the question might arise, then I'll know what I have to do," he said.

THATS TOO LONG TO READ AND WHETHER YALL LIKE IT OR NOT THE DNA DOES HAVE A CHANCE YOU EVER SEE IN HISTORY A PARTY BEING CONSIDERED A THIRD PARTY WAS ABLE TO GET A CROWD LIKE THE DNA, I MEAN IM NOT SAYING ITS A BIG ONE BUT STILL AND THEY GATHERD THAT IN LESS THAN A YEAR THINK ABOUT IT NOW.