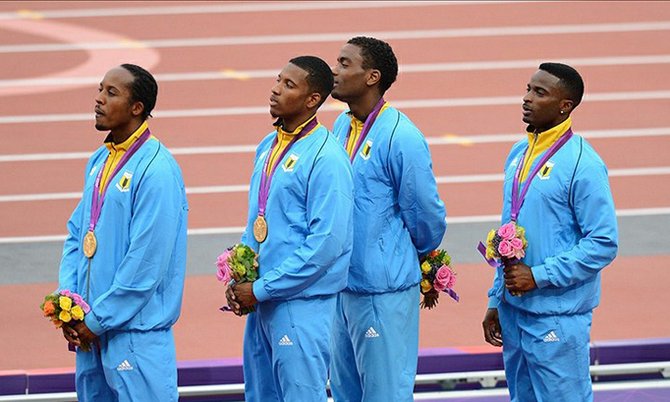 Chris Brown, Demetrius Pinder, Michael Mathieu and Ramon Miller listen to the Bahamas national anthem on the podium after receiving their gold medal in the men's 4x400m relay during the London 2012 Olympic Games at Olympic Stadium. James Lang-USA TODAY Sport.

LONDON, England: It was a crowning moment for Team Bahamas on Saturday night at the Olympic Stadium as the quartet of Chris 'Fireman' Brown, Demetrius Pinder, Michael Mathieu and Ramon 'Fearless' Miller finally received their gold medals for their historic 4 x 400 metre relay victory in the final on Friday night in a national record time of two minutes and 56.72 seconds.

They collected their medal after dethroning United States of America, relegating them to the silver, while Trinidad & Tobago also ascended the podium for the bronze.

The medals were presented by Pierre-Olivier Beckers, one of the newest IAAF Members from Belgium, while Robert Hersh, the International Association of Athletics Federations' senior vice president from the United States gave each athlete a flower.

The Bahamas gold was a promotion from silver won by the team of Andretti Bain, Michael Mathieu, Andrea Williams and Chris Brown in 2008 in Beijing, China. Avard Moncur and Ramon Miller were reserves.

This year, the reserves included Avard Moncur, Andrae Williams and Wesley Neymour, none of whom participated.

SEE MONDAY'S TRIBUNE FOR ALL THE NEWS AND REACTION