IMMEDIATELY after the Golden Knights crossed the finished line and made history at the London Olympics, Bahamians all over celebrated. 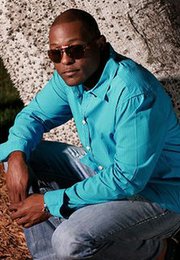 Whether they were at work, at a local pub, or on a line at the bank, they shouted, screamed, jumped for joy that the Bahamas had finally won a gold medal.

Two Bahamian musicians celebrated the historical moment, with the release of singles, paying tribute, and re-telling the story of that golden moment on the tracks.

“The song was a tribute to the Golden Knights for their accomplishment. Something like this is  historical,” Bahamian musician, Eugene “Geno D” Davis told In Ya Ear.

Geno D released “Tearin Up Da Tracks” in a matter of days. He said the inspiration from that moment, fuelled the speedy delivery of the single.

He said “Tearin Up Da Tracks” embodies the spirit of what all Bahamians were experiencing while watching the race, and also gives the Golden Knights a “slap at the back of the head” for their achievement.

Paying tribute to athletes who have put the Bahamas on the map during past Olympic Games, is nothing new for Geno D. When the Golden Girls made history in Sydney, he paid tribute to them. And when Tonique Williams Darling won the 400m in Athens, he released “Go Tonique Go”.

With that track record, he said it was only fitting to pay tribute to the men’s relay team.

“It brings me great pleasure to do songs like this. That wassomething historical and it is important that we give people the support they deserve when they accomplish great things as such,” he said.

The artist said he did not get an opportunity to watch the race live. However, news reached him in Exuma, that the Bahamas had “struck gold”.

“I watched the replay of the race and I could only imagine what the feeling must have been like watching it live.”

“I wrote the song, the melody, and the Ira Storr produced it. The song was completed by that Monday after the race and was on the radio the following day.”

The artist said he intends to make a presentation of the song to the Golden Knights. Geno D was not the only Bahamian musician, fast out the blocks with a Golden Knights themed song.

D-Mac was also one of the first to put out a track hailing the Olympic experience. He said after watching the race he went straight to his studio and the song was completed in a few hours.

“The song was inspired after watching that race. I know my neighbours probably thought something was wrong with me because I was yelling “we did it”. That was where the title for the song came from because “we did it” just stuck with me,” D-Mac told In Ya Ear.

D-Mac said his song is not one just to celebrate or gyrate to, but it is his way of preserving the history of the Bahamas.

D-Mac said he has to do a little tweaking to the song, because in the song the men are hailed the “Golden Boys”.

“That just goes to show you how fast that song was out. Everyone was calling them the Golden Boys at the time and that was what I went with. Now I have to change it,” he said.

DMac also said he hope he and other Bahamian artists can make a collective presentation to the Golden Knights.

Other artists including Rik Carey, Daddi Whites, Senovia have all released songs paying tribute to the Golden Knights.