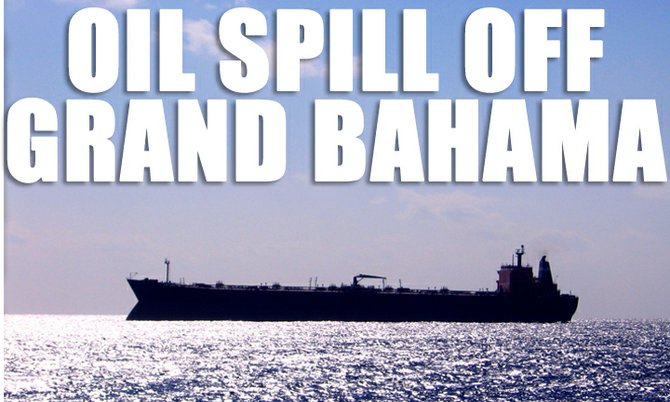 5:30 p.m. UPDATE: Minister of Transport and Aviation Glenys Hanna-Martin described the oil spill, during a press conference at the port department this evening, as a tier one spill, which she said represents the least threatening type of spill on a scale of 1-3.

According to Ms. Hanna-Martin, the spill occurred as a result of a breach in the hull of a cargo vessel that had departed the Freeport Container Port on its way to Florida.

She added that the crew immediately took steps to contain the leak - described as "slow" - and repair the damaged part of the vessel.

She said a full report on the incident will be available in 72 hours.

More on this story in tomorrow's Tribune.

4:00 p.m. - A MAJOR oil spill has occurred three miles off of Grand Bahama, The Tribune can confirm.

Minister of Transport and Aviation Glenys Hanna-Martin said her and her team have conducted a flyover of the site and will be updating the media at 4:40 p.m. on their findings.

It is reported that an oil tanker may have spilled thousands of gallons of oil.

The Tribune will update you on the government's findings.

Which side of Grand Bahama, North / South?

Common sense is often a hard sell, particularly by those who think it's OK to ignore the dangerous oil slick risks to Bahamland's tourism, with messing around with drilling for oil.

I am not sure if I need to reply to Debra 56, but just in case, SOUTH; secondly, what a disaster in all the sense of the word. Tourism? How about the marine life? and shall we have a sticky/mud bath from now on and until when?

Just a preview of what could happen once The RT. Hon Perry Christie sign the papers to start drilling for oil.

I wonder under which classification of a mess would the NIB mess and the PLP government fall under. Looking more like a Tier 3 spill, everyday, as it has gotten completely out of hand and requires external help. God help us all.