Ministry Says Spill Is No Risk 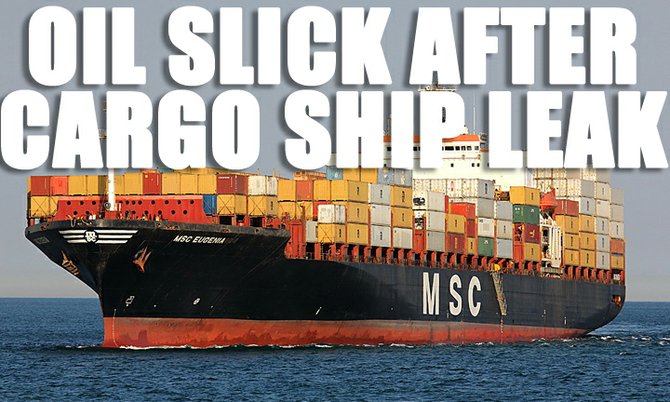 A CARGO ship leaking Heavy Fuel Oil left a slick off Grand Bahama yesterday that officials assured poses no threat to coastal areas of the Bahamas.

“The harbour is not at risk, no coastal area is at risk and no beaches are is at risk,” Minister of Transport and Aviation Glenys Hanna-Martin said during an emergency press conference yesterday evening.

However, she and other officials have yet to determine just how much of the ship’s “3,000 barrels” of oil leaked from the vessel, how the ship got damaged and how soon after leaving Grand Bahama the crew of the vessel noticed the leak.

The ship was not carrying the oil as cargo, she said.

Ms Hanna-Martin, who held an emergency press conference on the incident yesterday evening, said initial reports revealed that the MSC Eugenia left the Freeport Container port, bound for Port Everglades, Florida, at about 4:30 a.m. and reported hours later that oil was noticed “bubbling” out from the ship as it sailed 12 miles southwest of Grand Bahama.

She said the crew of the ship, upon noticing the leak, moved the vessel into an area of the ocean where a “steering current” exists that would push the oil out into the Atlantic. They then deployed a boom to contain the oil, as the remainder of the oil was pumped into auxiliary storage tanks in order to control the leak, said Ms Hanna-Martin.

She said she and members of the Oil Spill Committee flew over the area of the spill yesterday afternoon to assess the damage and noticed a slick of oil extending from the vessel, out to sea. The Oil Spill Committee consists of representatives from the Ministries of transport and aviation, environment and tourism, and from the Bahamas Environmental, Science and Technology (BEST) Commission, Customs Department and Attorney General’s office.

She added that the committee suggested against the use of dispersant (used to break down the oil) on the oil slick because of the possible impact on the environment, and that the BEST commission would soon conduct an assessment of the reefs to ensure they were not damaged by the spill.

BEST commission spokesman Arana Pyfrom said his team could take 48 hours to one week to do the assessments.

Port Controller Commander Patrick McNeil said before the committee could come to any conclusions about the spill and determine if there was any fault on the part of the shipping company, a full report on the incident would have to be done. He said a port department team was on the vessel yesterday doing an assessment and that a report could be finished by Thursday.

According to the committee, the ship has already booked dry dock space in Freeport to repair the damage.

“Matters appear to be under control,” said Ms Hanna Martin.

The vessel is described by marinetraffic.com as being a 900ft, 54,000 tonne cargo ship built in 1992 and registered in Panama.

Okay then! Everything is fine! Go about your business! Nothing to see here!

Ms Hanna-Martin said. “It is an at-sea-event and it is our view that the normal ocean currents will take care of it.”

I say I hope so because I am not satisfied this or the previous FNM administration has anything in place other than a good prayer and being dependent upon "normal ocean currents" to take care of any potential oil spills, leakage or whatever way thick oil slicks enter our prestige waters?

Neither one these Christie or Hubert administrations can even run the National Insurance Board without it seems, money leaking out, so judge controlling the oil sludge's, or God forbid they on January 28. 2013 get PM Christie's wish to advance to the the licensing stage for making numbers rackets "bosses January's Christmas?"

Whatever Russel u know u votin Yes...u ain goin against Perry

This is a sign from God that we don't need to be partaking in any form of oil exploration. I've gone on my rant before about the dangers of an oil spill in the Bahamas. Loss of sealife, loss of beautiful clear blue seas, and loss of TOURISM!

Wake up! Say no to oil exploration.

Comrades your love song to ya Papa Hubert.