Russell: Moss Should Be Suspended 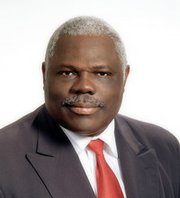 Kenneth Russell, although praising the government for taking action with the

investigation, noted the suspension of Director

Algernon Cargill and questioned what information led the Prime Minister to decide that Mr Moss would stay on.

“If it was me, I would suspend them all pending an investigation,” he said yesterday.

Also yesterday, Fred Gottlieb, former chairman of Water and Sewerage, Bahamasair, and BEC, called the issuing of a credit card to any chairman or board member, “unnecessary and undesirable.”

Although explaining that his comments were meant in a “general” sense, they come on the heels of claims that Mr Moss and Mr Cargill were alleged to have spent monies on NIB company credit cards, among other things.

Tuesday, Prime Minister Perry Christie had determined Mr Moss will not be placed on administrative leave as a thorough investigation of NIB’s books get underway.

He said investigations will also review Mr Moss’ activity at the Board.

Political pundits have questioned the move considering the suspension weeks ago of Mr Cargill, pending the outcome of a probe into claims made against him in a lengthy, highly sensitive Board report that was leaked. The report was written by NIB chairman Moss to Labour Minister Shane Gibson.

“I never had these kinds of problems when I was Minister,” Mr Russell said.

“I don’t know what information the Prime Minister has as to why he went in the direction that he went in. But if it was me, I would suspend them all pending an investigation.

“I think the Prime Minister is doing right having the audit and investigation done, but if one person got suspended then all of them should have been suspended.”

It is “very important” that the integrity of NIB is maintained, the former Cabinet Minister continued, and NIB cannot be put in a position where the public becomes “suspicious of everything” that is happening at the Board.

“And it should not be put in a position where people don’t have the confidence in the operation of NIB. NIB is very important to the people of the Bahamas in terms of their illness (and) in terms of their pension – especially,” Mr Russell said.

“That is why we have to be very careful that NIB does not get a reputation where all of us start to second guess what’s happening down there.”

In a letter to the editor sent by Mr Gottlieb, the former chairman said: “I question why the chairman or any member of the board of directors of a public corporation should be given credit card for use during the period of their appointment.

“I served as chairman of several public corporations and, as such, did not approve credit cards being given to any board member (including myself) as I deemed this to be unnecessary and undesirable.”

Here we go again with the scandals while Cool PC just sits there and orders an investigation/committee. Same ole same ole.

Mr. Russell is absoutely correct. I note with interest that leaked NIB compensation of exeuctives was given to Mr. Shane Gibson ONLY. So now the PM should know who is leaking info to Bahamas Press. Folks, you would be even more interested to note that the ONLY blacked out Exec salary on the leaked doc. was the Attorney General's daughter in law - talk about playing dirty!

The leader of the oposition was soo correct - now we now know the matter of NIB is simply "the fox watching the hen house" - but who is the fox Moss or Gibson?

There are many, many examples here in the Caribbean and the wider world where any leader would've asked for suspensions or an outright resignation of officers in situations like that in National Insurance. My question is, what will Prime Minister do if in the end it is found that Mr. Moss is guilty of something. Will he resign from his position as Minister of Finance and Prime Minister?

With what has been brought out, how can the Prime Minister allow Mr. Moss remain in such a position. Does he think the Bahamian people will sit by and allow these people to abuse the People's future? It seems as if we are again waking from a really bad dream, for it was just a short while ago we were faced with scandals like these from the same political enterprise.

There is only one other jurisdiction in the Southern Caribbean where these types of corruption activities are being practiced and I am sure we would not like to be compared with that country.

the people vote for a goverment that most represents themselves ,,,,,the people that voted PLP don,t care as long as some crumbs fall their way ,,some of them are so uneducated they fall for that crap that the PLP is protecting the treasury from the old baystreet boys ,,the baystreet boys got theirs they don,t need the treasury ,,this is now black on black crime ,nothing more ,nothing less ,,they are stealing from every soul in the bahamas ..