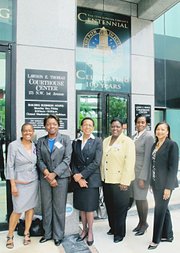 SENIOR government officials including Minister of Social Services and Community Development Melanie Griffin and Attorney General and Minister of Legal Affairs Allyson Maynard-Gibson attended the Caribbean Dialogue on Rule of Law and Gender-Based Violence in Miami, Florida from December 11-13.

The US Department of State Office of Global Women’s Issues hosted the conference at Florida International University. The conference brought together judges, prosecutors and high court justices, as well as police officers and representatives from civil society from 12 Caribbean countries including Jamaica, Trinidad and Tobago, and Barbados to exchange ideas and share strategies for strengthening the rule of law and ending gender-based violence in the Caribbean.

Secretary of State Hillary Clinton, speaking via video, welcomed delegates to the dialogue and encouraged them to end domestic violence in their countries. She noted that every Caribbean nation has a sexual violence rate that is higher than the world average.

During the conference, Caribbean representatives toured the Miami City Dade County Family Court where they spoke with a number of judges and viewed the proceedings of the family court.

Anita Botti, Chief of Staff and Principal Deputy in the Department of State Office of Global Women’s Issues chaired the dialogue.

Conference delegates heard from a number of speakers including: Liliana Ayalde, Deputy Assistant Secretary in the State Department’s Western Hemisphere Affairs; Brian Nichols, the Principal Deputy Assistant Secretary for the State Department’s Bureau of International Narcotics and Law Enforcement; representatives from UN Women, the government of Barbados, the University of the West Indies and the government of Jamaica.