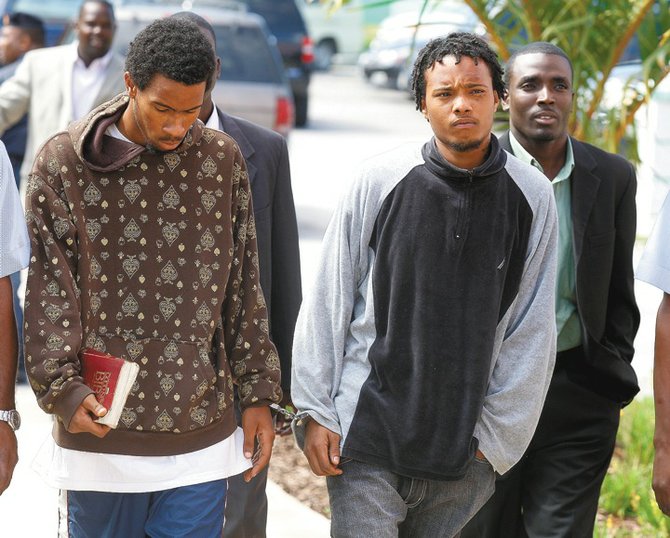 Sebastian Cartwright, left, holding a Bible, and Ravon Dwight Major outside of court.

THE teenage son of convicted drug traffickers Dwight and Keva Major was arraigned in Magistrate's Court yesterday afternoon in connection with the robbing and kidnapping of a local college student.

It is alleged the pair, armed with firearms, robbed and abducted Okoye Cooper.

Major, of Soldier Road, is accused of robbing Cooper of a $240 cell phone while his co-accused is charged with robbing the victim of his 2000 Honda Inspire valued at $9,000, along with bank cards and cash.

Major was also separately charged with being an accessory to kidnapping.

It is alleged that at about 7.30pm on Thursday, February 9, Cooper was on campus at the College of the Bahamas when he was approached by two men, abducted and later found at Marshall Road in the trunk of a car, gagged and tied up.

The defendants were not required to enter a plea to the charges due to the nature of the offences. They were told by Chief Magistrate Gomez the prosecution would serve them with a Voluntary Bill of Indictment on April 24.

He explained the Bill would forward the matter directly to Supreme Court for trial, bypassing a lengthy pre-trial in Magistrates Court.

On the issue of bail, he said: "The Magistrate's Court does not have the power to grant you bail.

"You may apply for bail in the Supreme Court. You will be remanded into custody at Her Majesty's Prison until completion of trial."

The chief magistrate asked the defendants, who were not represented, if they had any questions. However, they had none.

The pair return to court for VBI servicing April 24. Thirteen witnesses are expected to give evidence in this case.