BISHOP Randy Fraser's appeal against his unlawful sex conviction began yesterday in the Court of Appeal. 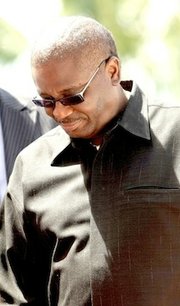 Fraser, convicted last November of having sex with a dependent between July 2005 and February 2006, sat in court as his attorney Jiaram Mangra argued that the conviction was "unjust and unreasonable" given the evidence.

Prosecutors argued that the minister abused his position of trust by having sexual relations with a 16-year-old girl who he had agreed to counsel.

He was originally charged with the offence in the summer of 2006, but was freed a year later after a mistrial. The retrial started in 2008.

After several delays, Deputy Chief Magistrate Carolita Bethell handed down a guilty verdict and sentenced Fraser to three years at Her Majesty's Prison.

Mr Mangra informed the magistrate at the ruling that he intended to file an appeal, and sought to keep his client out of prison until the completion of the hearing.

However, appellate court president Justice Anita Allen, with Justices Stanley John and Abdulai Conteh, ruled that there were no exceptional circumstances that would lead to the bishop being granted bail.

Yesterday, Mr Mangra claimed the magistrate had made an error in considering evidence outside the period of the alleged offence.

He said any incidents that took place in July 2005 or February 2006 should be excluded.

The justices did not agree, though they acknowledged his position. They asked the attorney if he thought there was evidence to suggest intimacy between the victim and Fraser. He said no.

Justice John then brought up the semen found in Fraser's office, and Mr Mangra argued it had no connection to the virtual complainant.

The justice asked the attorney if he was suggesting that the victim's testimony did not have any credibility, despite there being physical evidence to prove some form of sexual act took place.

The attorney responded that this evidence alone was not substantial.

He then argued that there were a number of "material inconsistencies" in the victim's testimony, bringing her credibility into question.

The hearing resumes today at 10am.