POLICE and clergymen met yesterday to renew their commitment work together against crime. 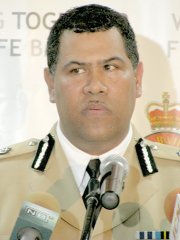 Commissioner of Police Ellison Greenslade said: "There must be a sense of urgency to all that we do now going forward, we have to salvage and save this country."

"It cannot be business as usual in 2012, we're going to have to turn the corner on this and I believe the appropriate place to start is with the church."

Both Mr Greenslade and BCC president Dr Ranford Patterson stressed the need for positive youth development and mentoring, greater community involvement, and a return to fundamental principles of respect.

"We are taking it to another level now," Dr Patterson said.

"We need to try everything, we don't have a panacea, we just have to do our part."

In a press statement sent yesterday, Bishop Simeon Hall, a council member, called for draconian measures to be adopted.

He also said there are "powerful, influential persons" who benefit from the criminal culture, and that these people can not be expected to lead in the fight against crime.

"The new laws, as strong as they were, seem to have done very little to stop the internecine bloodletting on our streets," the press statement read. "As a community we are in a hostage situation and the church can no longer remain indifferent or philosophical about murderers."

Bishop Hall added that the idea of public hanging is beginning to look attractive as a method of scaring would-be criminals.

The government's package of 11 anti-crime Bills was passed in October.