FOLLOWING the Ministry of Labour's offer to meet with representatives of frustrated airport employees, one union leader dismissed the proposal as nothing but a "stalling tactic".

Vice-president of the Bahamas Customs, Immigration and Allied Workers Union (BCIAWU) Sloane Smith also revealed there is a good chance the unions will not attend any such meeting.

Unions representing customs, immigration, and air traffic control employees issued a warning last week, saying some kind of action will be taken if several outstanding issues are not resolved. 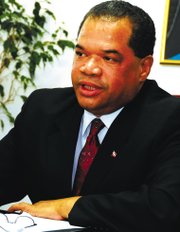 Minister of Labour Dion Foulkes scheduled a meeting for January 10 to discuss customs and immigration contract negotiations, but Trade Union Congress president Obie Ferguson accused the minister of "acting outside of his statutory function," as the 16-day mandated period for the resolution of a dispute would have already passed.

"As their lawyer, I cannot advise (the unions) to do anything outside of the law or that will put them at a disadvantage," Mr Ferguson said.

Speaking to The Tribune, Mr Smith said: "If we go to the meeting, we will be endorsing the wrong he's doing. Knowing the law, we will not go into a meeting where the honorable minister knows he out of his statutory strength.

"He knows full well what he's proposing is improper. To the knowledgeable person, it's merely a smoke screen.

"The meeting he scheduled is not geared towards solving any issues."

Mr Smith said the unions immediately saw the proposed meeting for what it was - "just a stalling tactic."

Customs and immigration officers at the Lynden Pindling International Airport walked off the job earlier this month, after raw sewerage made the workplace "unbearable," according to union officials.

The walkout occurred around 8.30am and caused passenger clearance to stall for a little over an hour.

Among the employees' concerns are: that staff members are not getting hazard pay; that staff are not being confirmed after years of probation without any credible reason; and that employees are repeatedly being disciplined for lateness although contracts state this should not occur more than four times per month.