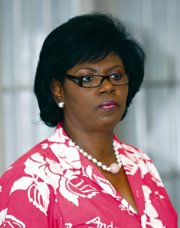 Vernice Walkine, vice-president of marketing and communications at NAD.

REPORTS of excessive flight delays at the Lynden Pindling International Airport yesterday were downplayed by officials of the Nassau Airport Development company.

Vernice Walkine, vice-president of marketing and communications at NAD, denied the reports, contending that it was a normal day of operations with the exception of two delays.

Mrs Walkine questioned the origins of those rumours, saying that the company’s records showed that there were only two “excessive delays.”

However, a USAir passenger, on board that airline’s noon flight to Washington, sent a text message to a friend that the aircraft was being towed back to the terminal because passengers were told that “the computer was down”.

The flight eventually got airborne at 3pm.

Responding in a statement to The Tribune’s question as to whether this had affected other aircraft, Mrs Walkine said: “I’m not sure of where the reports have come from, but according to our logs, there were two ‘excessive’ delays today, both caused by delayed flights coming into LPIA.”

“Air Canada came in at 1:43pm instead of 12:05pm (no cause was given) and Spirit was delayed by approximately four hours due to mechanical issues necessitating a change of equipment.”

“All in all, a normal day of operations,” she concluded.

The statement from NAD’s VP of marketing and communications came shortly after The Tribune received a response from the head of Bahamas Air Traffic Controllers Union Roscoe Perpall.

BATCU president Perpall, calling from the airport after being contacted about the reports, denied any delays.

“There are no delays we are aware of at the airport. As a matter of fact, things are very slow in terms of air traffic.”

The most recent reports of serious flight days was on January 2, one of the busiest and most profitable days in the industry.

Carriers complained of costly delays for more than two hours with a much broader impact on goodwill as customers had suffered through grounded and returned flights.

Executives at the Nassau Airport Development company at the time pointed to flight congestion, and the saturation of Miami airspace, which resulted in a hold on traffic.

Though, a person close to the situation said that with the exception of a one-hour maintenance delay, at least five flights – from Miami, Fort Lauderdale, Orlando and Freeport – were affected by the action of Air Traffic Controllers.

Pineapple Air and Bahamas Air had also suffered costs as a result of delays incurred on that occasion.